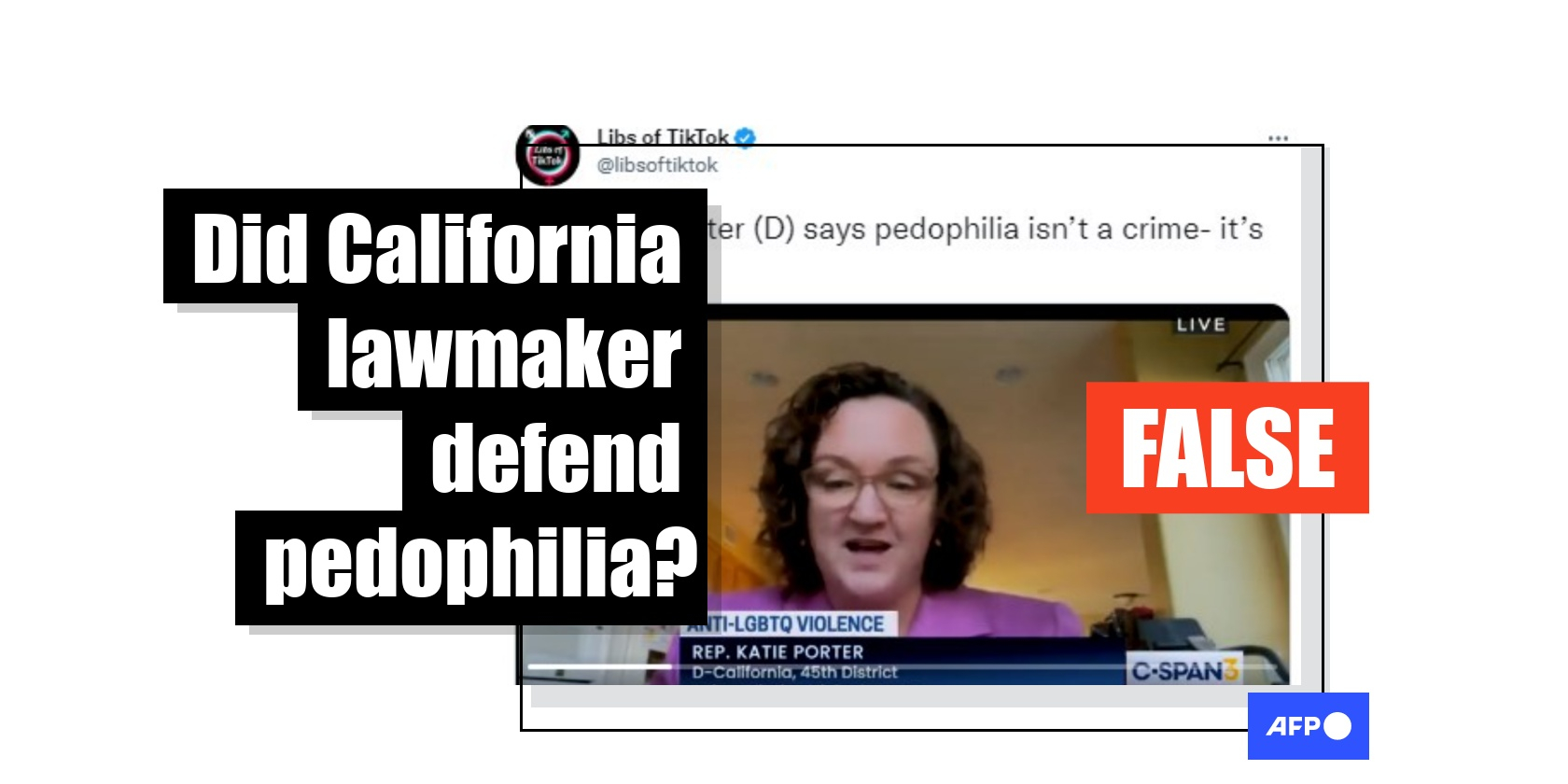 Social media users claim Democratic US Congresswoman Katie Porter said during a hearing that pedophilia is not a crime, but an identity related to sexual orientation. This is false; the posts misrepresent the California representative's comments on anti-LGBTQ narratives.

"Rep Katie Porter (D) says pedophilia isn't a crime- it's an identity," says a December 15, 2022 tweet from Libs of TikTok, an account with more than 1.7 million followers that frequently spreads anti-LGBTQ discourse.

The post includes a clip of Porter, who represents the 45th Congressional District in Orange County, California, speaking during a December 14, 2022 House Oversight and Reform Committee hearing. Activists and survivors of the November 2022 mass shooting at Club Q in Colorado Springs, Colorado testified on the rise of anti-LGBTQ violence in the US. "This allegation of groomer and pedophile, it is alleging that a person is criminal somehow and engaged in criminal acts merely because of their identity -- their sexual orientation, their gender identity," Porter says in the footage shared online, which bears the C-SPAN logo.

But the clip omits comments from the California representative that make clear she was discussing how false claims on social media linking the LGBTQ community to child exploitation can lead to offline violence.

About three hours into the hearing, Porter mentioned a report from the Human Rights Campaign (HRC). The advocacy group found a spike in social media posts calling LGBTQ people "groomers," a term that refers to adults who coerce children into sexual abuse, following the passage of a Florida law that bars public school teachers from discussing sexual orientation or gender identity with students in kindergarten through third grade.

Porter said during the meeting: "The groomer narrative is an age-old lie to position LGBTQ+ people as a threat to kids, and what it does is deny them access to public spaces, it stokes fear and can even stoke violence."

She did not make any comment about the criminality of pedophilia.

Porter then asked HRC President Kelley Robinson about Twitter's policies against such posts. Following Robinson's answer, Porter made the statement shared online and said: "So, this is clearly prohibited under Twitter's content, yet you found hundreds of these posts on the platform."

A December 13, 2022 report published by Media Matters, a liberal media watchdog, and the Gay and Lesbian Alliance Against Defamation (GLAAD) found Elon Musk's takeover of Twitter corresponded with a rise in anti-LGBTQ rhetoric on the platform.

AFP reached out to Porter for comment but a response was not forthcoming.

AFP has fact-checked other false claims linking the LGBTQ community to pedophilia.