A gingerbread White House is seen in the State Dining room at the White House in Washington, DC, November 28, 2022 ( AFP / Jim WATSON)

The unveiling of the 2022 holiday decorations at the White House sparked claims that the Bidens intentionally included satanic imagery. This is false; the gilded mirror shown in photos shared online has been in the White House collection since 1946 and was displayed during other presidencies.

"Uh… Call me crazy but… Maybe I missed the part of the story where Baphomet is supposed to be a Christmas decoration?" says a November 29, 2022 tweet.

The claim also circulated on Facebook, including one November 28 post warning: "Idk about you, but I don't worship the spirit of Baphomet! Christians wake up! This isn't a conspiracy theory. The White House is full of people working daily for Satan!" 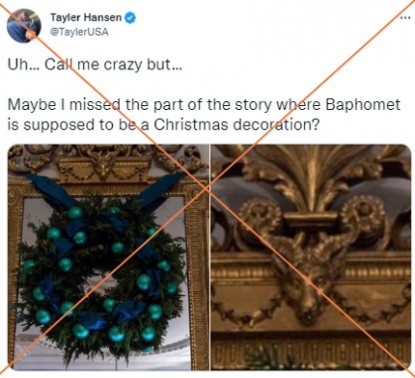 Similar claims spread on TikTok and in a segment on a talk show affiliated with Alex Jones's Infowars. Baphomet is a deity that the Knights Templar was accused of worshipping.

French occultist Eliphas Levi is credited with imagining Baphomet as a winged human figure with the head and feet of a goat in 1854. More recently, The Satanic Temple took an 8-foot-tall statue of the goat-human hybrid around the United States as part of protests against government buildings with prominent religious displays.

The notion that the White House decorations include Baphomet plays into theories pushed by followers of QAnon, a far-right movement that baselessly claims there is a global cabal ofSatan-worshipping pedophiles. But the posts are incorrect.

Jessica Fredericks, assistant vice president of communications at The White House Historical Association, told AFP that "the mirror was made circa 1790 and was donated to the White House in 1946."

She said presidential families have used the mirror for decades.

"It appears that it was put on display in the State Dining Room circa 1961 when the Kennedys moved in," Fredericks said, pointing to a December 13, 1961 archive photo showing the gilded mirror.

The image in the posts was first published on Twitter by First Lady Jill Biden on November 28.

For this year’s holidays at the White House, we hope to capture the spirit embodied in the very idea of America: We the People. pic.twitter.com/SKyXZ9RkI8

The same mirror was on display alongside White House holiday decorations during Donald Trump's presidency, as seen in photos taken by AFP. 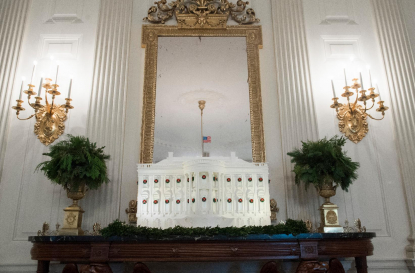 The White House Gingerbread House is seen in the State Dining Room during a preview of Christmas and holiday decorations at the White House in Washington, DC on November 27, 2017 ( AFP / Saul Loeb)

AFP has debunked other false claims about holiday traditions at the White House here and here.