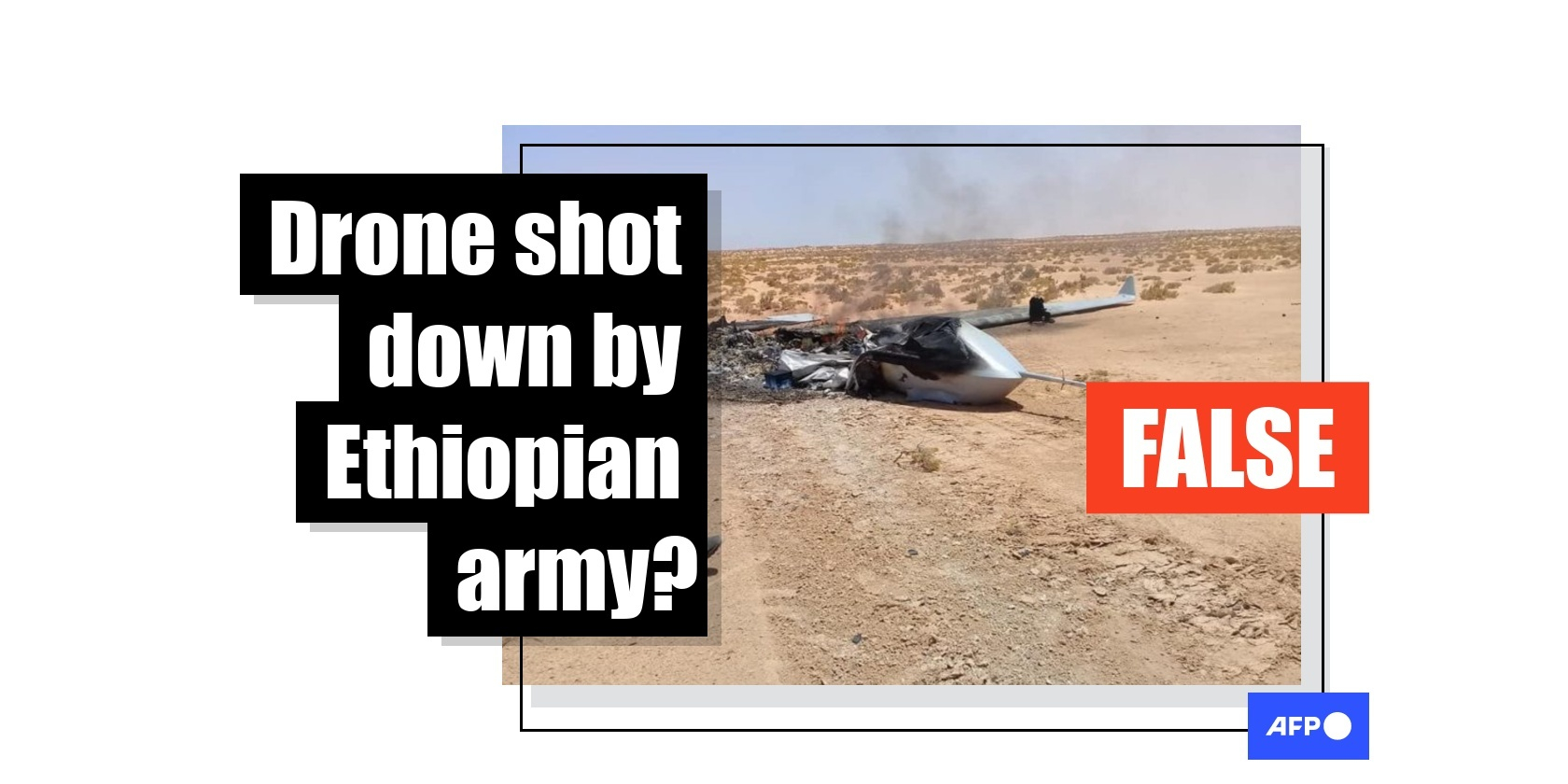 Image of downed drone is unrelated to Ethiopian conflict

An image of a crashed unmanned aerial vehicle has been making the rounds on Facebook with claims that it shows a Sudanese drone recently shot down by the Ethiopian army as it attempted to enter Ethiopian airspace. However, this is false: the picture predates the war in Ethiopia. It was shared in 2019 in online reports and social media posts about a downed drone in Libya.

The post, archived here, was published in Amharic on October 8, 2022, accumulating more than 370 likes.

“A military spy drone from Sudan entering Ethiopia’s airspace has been shot down. It was shot at the Ethio Sudanese border and said to be used by the ones who are trying so hard to disrupt Ethiopia (TPLF),” the caption reads.

The post includes an image of a crashed drone with black smoke rising from it. The photograph was taken in a desert-like area, a landscape similar to the arid Tigray region of northern Ethiopia. 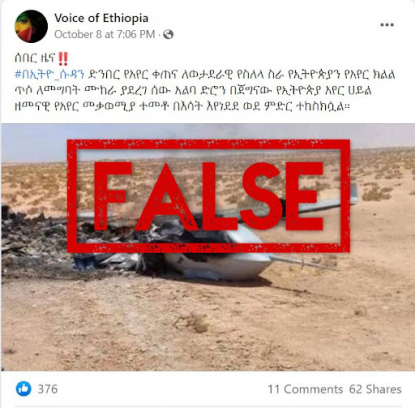 Tigray has been at the centre of a civil war which began in November 2020 and has displaced an estimated 2 million people, according to UN figures, with reports of atrocities perpetrated by both warring sides. The death toll remains unknown.

The post claims that the pictured drone was a “Sudanese spy drone” attempting to gather information while flying over Ethiopian airspace.

Sudan, a downstream country, has been opposed to Ethiopia’s Great Ethiopian Renaissance Dam which caused tensions at the border between both countries. These tensions grew after fighting erupted in Tigray in November 2020, sending tens of thousands of Ethiopian refugees into Sudan.

The warring sides in Ethiopia announced on November 2, 2022, an agreement to silence their guns after two years of devastating conflict that have claimed thousands of lives and left millions needing aid in Africa’s second most populous country. 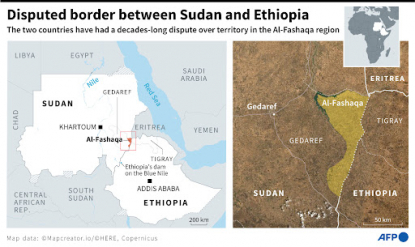 While fighting has escalated in recent weeks on multiple fronts in northern Ethiopia, with government air strikes hammering Tigray, the photo does not show a Sudanese drone downed in Ethiopia in 2022.

AFP Fact Check conducted reverse image searches and found that the image of the crashed drone was unrelated to the Ethiopian conflict as it predates the war. In addition, the picture in the misleading posts had been doctored to crop out a soldier in military fatigues.

Search results led to news articles using the picture as part of a story about a drone being shot down in 2019 in Libya, not Ethiopia.

The photo was published by Military Africa, a news site focused on African defence technologies. The article from August 3, 2019, discussed a Libyan army drone that was shot down by forces allied with the Government of National Accord, an interim government for Libya formed under a United Nations-led initiative.

The Libyan Observer also used the image in a story, reporting that “the Air Force of the Libyan Army intercepted the UAE’s drone” and shot it down using a combat laser, an advanced piece of military technology said to have been supplied by Turkey.

Original image published by Military Africa, left, and the cropped image from Facebook

Footage of the crashed drone also surfaced on other social media platforms, including Twitter. More images captured from different angles including a picture of a drone on fire in the air were shared in this Facebook post.

The images were also published on August 3, 2019, by Libyan news site Libya Febrayer TV. “#BreakingNews: #Libya’s Army forces under GNA’s command shoots down a #UAE drone that was attempting to strike civilian targets in #Misrata #Libya #Tripoli”, read the tweet.

EHA News posted images on social media and tweeted “#BREAKING The #Libyan Government of al-Wefaq forces have announced the downing of a Libyan National Army (LNA) #Chinese made Wing Loong II UAV before launching an attack on #Misrata.”

#BREAKING The #Libyan Government of al-Wefaq forces have announced the downing of a Libyan National Army (LNA) #Chinese made Wing Loong II UAV before launching an attack on #Misrata. pic.twitter.com/rCU0AqtGxV

The drone photo was also featured on Turkish news site Turkish Minute on August 14, 2019. Their article explained that “an armed UAE drone, made in China as the Wing Loong II, was doing reconnaissance over the Misurata area for Haftar and looking for targets for its anti-tank missile”.

In August 2022, Ethiopia’s air force said it had shot down a plane carrying weapons for the rebel Tigray People’s Liberation Front (TPLF) that had encroached on the country’s airspace via Sudan.

But there have been no recent announcements of any similar incidents. Ethiopia’s air force and the Sudanese embassy in Addis Ababa failed to respond to AFP Fact Check’s requests for comment.