A video has been viewed hundreds of thousands of times in Twitter posts that falsely claim it shows residents of China's northwestern city of Lanzhou fleeing Covid-19 lockdown in October 2022. The video was in fact filmed in Changzhou, a city near Shanghai in the country's east, and has circulated online since at least April in posts that say it shows residents there breaking through a cordon to get at food and supplies.

"The happy life of people in Lanzhou: Unite to break through the barricades," reads the video's simplified-Chinese caption.

Lanzhou is a city in northwest China's Gansu province.

The city has been locked down since October under China's harsh zero-Covid-19 policy, which has seen millions of people across the country confined to their homes and often complaining of poor conditions, food shortages and slow emergency responses.

The 57-second long clip shows what appears to be a line of people wearing blue medical gowns attempting to hold back a large crowd. But the crowd eventually manages to force its way through the cordon and rush towards an unseen destination.

The Internationale, a socialist anthem, appears to have been added to the video and can be heard throughout. 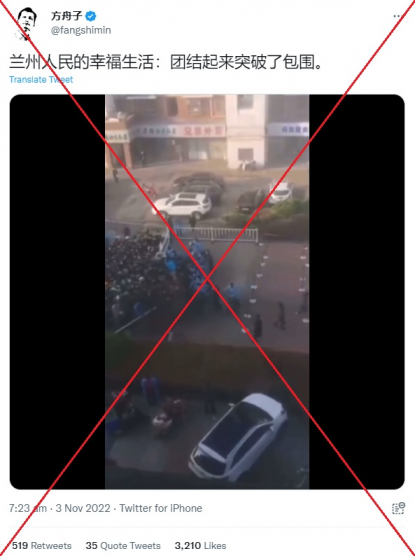 The video was also shared with a similar false claim in Twitter posts here, here and here.

It had previously circulated in tweets here and here from April that claimed it was filmed in Shanghai during its two-month citywide lockdown.

Keyword searches of Chinese shop signs seen in the video found it was filmed here in a residential area called Shunyuan Bacun in Changzhou.

Below is a comparison of shop signs seen in the video shared in the false posts (left) and the corresponding location found on Baidu Maps (right): 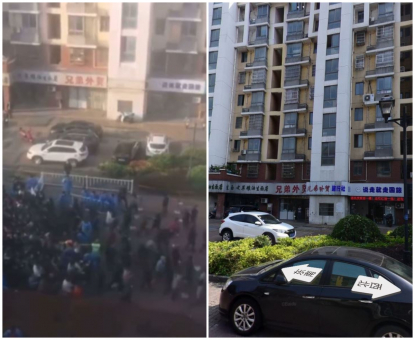 A further keyword search found the video has circulated online since at least April in posts that identify the location as Changzhou.

A post on Weibo from April 5 says: "#Quarantine# On April 3, Shunyuan Bacun on Yingping Road, Changzhou...Can you see why (they did this)?"

The video was also included in a report in the British tabloid The Sun, titled "FOOD FIGHT Moment Chinese residents break through cordon ‘to get at supplies’ amid world’s strictest lockdown".

The report says the footage was taken in Changzhou and allegedly shows the crowd rushing for food.

But it also says there are claims it shows people rushing to get PCR tests.