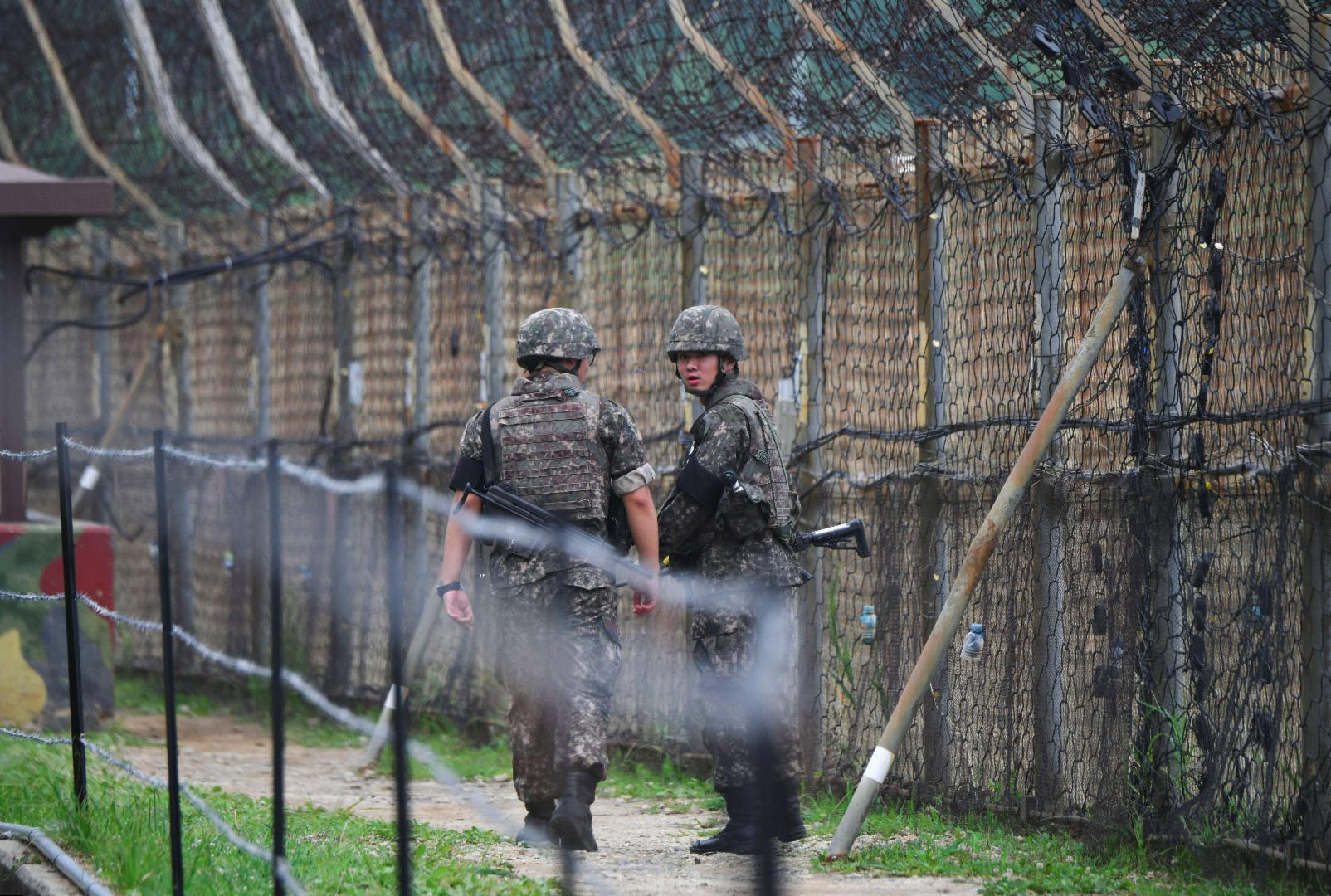 South Korean soldiers patrol along a fence in the Demilitarized zone (DMZ), dividing the two Koreas, in Goseong on June 14, 2019. South Korea on April 27, opened to the public one of the three new hiking trails along the DMZ -- in the eastern coastal county of Goseong -- for the first time since the end of the 1950-53 Korean War. ( AFP / Jung Yeon-je)

Korean social media posts have repeatedly shared a false claim that South Korean men are exempted from mandatory military service if they reside in Daeseong-dong -- a village located within the Demilitarized Zone (DMZ) between North and South Korea -- for a period of one year and eight months. A spokesperson for the country's conscription agency told AFP this exemption only applies to residents who lived in the village prior to the Korean War and their direct descendants, and only if they live there for at least eight months of the year.

It links to an article about Daeseong-dong, a remote village in the South Korean section of the DMZ that separates North and South Korea, on the tabloid website "Principles of Knowledge".

The article is titled "A place where anyone can be exempt from taxes and military service if they reside for a year and eight months".

It says that in order to become a Daeseong-dong resident, one must either be born there and live in the village for just a year and eight months, or marry into a family residing in the village. 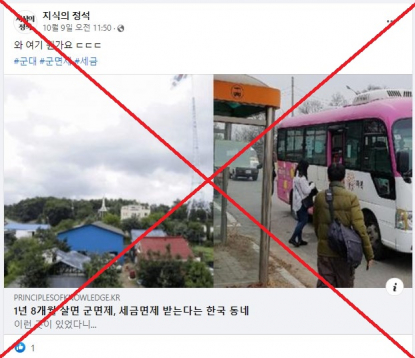 The village is formally under the jurisdiction of United Nations Command, as it is within the DMZ, but Daeseong-dong residents are still South Korean citizens.

All able-bodied South Korean men are required to serve in the military for at least 18 months, mainly because the country is still technically at war with nuclear-armed North Korea.

Conscientious objectors and others who refuse to serve are required to work in a jail or other correctional facility for three years.

Dispensation is only granted in special cases, such as for athletes and artists who win international awards deemed to elevate the country's standing.

But there are still debates about fairness, as seen with discussions about whether members of the K-pop supergroup BTS deserved exemptions from mandatory military service. The debate was put to rest when the group's agency announced in October that all members would fulfil their military service obligations.

Identical claims were shared on Facebook here, here, and here.

The claim, however, omits and misrepresents key information about the conditions attached to military exemptions for Daeseong-dong's residents.

Details about the exemptions are included in a page about Daeseong-dong on the South Korean government's official website about the DMZ.

It says the village "is administered by the United Nations Command per Article 10 of the armistice agreement, and therefore its residents are exempt from two of the four duties of [South Korean] citizens, which are taxation and national defence."

Article 10 of the armistice agreement, which ended hostilities in the 1950-53 Korean War, specifies that civil administration in the South Korean section of the DMZ is the responsibility of the UN Command.

It says that in order to retain residency in the village, and therefore receive exemptions from military service, residents must live in the village for a minimum of eight months a year -- not only a year and eight months in total, as claimed in the misleading social media posts.

A spokesperson for South Korea's conscription agency, the National Manpower Administration, confirmed the information posted on the DMZ website on October 26.

"The residents of Paju's Daeseong-dong village are indeed exempt from duties of national defence," the spokesperson told AFP.

"However, this privilege only applies to residents who lived in the village prior to the Korean War and their direct descendants, therefore not to any men from the outside, and is only maintained on the condition that the resident lives in the village for a period of eight months every year."

The village's unique status and the exemptions granted to its residents were also featured in a report published by the country's Ministry of Culture, Sports and Tourism, on April 5, 2018.

"As much as it is under strict military control, residents of the village are granted various unique privileges, such as exemptions from duties of taxation and national defence - two of the four duties of all South Korean citizens," the report reads.