A video showing panicked people running across a fairground has been viewed thousands of times in false posts about people in China fleeing in order to avoid being sent to a Covid-19 quarantine camp. In fact, the clip shows an incident in the US state of Texas in which a man allegedly made online threats to attack a county fair that "caused alarm", according to a statement issued by the local sheriff's office. The man was later arrested, police said.

The eight-second clip has been viewed almost 5,000 times since it was posted on Twitter here on September 29, 2022.

It shows screaming people running through a carnival as alarms blare in the background.

The English-language tweet reads: "CHINA - A person scanned his or her QR code vaccine passport and it came back red. Then someone shouted: "COVID positive person here!...

"People fleeing in panic. Why? Because if they don't escape in time, they will be sent off to a quarantine camp."

The video was shared in response to the same user's tweet about China's digital "health code" system, part of a number of strict policies aimed at eliminating the Covid-19 virus that also includes lockdowns and regular mass testing.

The health code requires residents to scan a QR code at entrances to offices, malls, restaurants and other premises to bring up their latest Covid test results.

A green icon indicates they are free to enter, while red or amber means they may have, respectively, tested positive or passed near someone who has.

The claim was also shared in similar Chinese-language tweets, written in both simplified and traditional characters, such as here and here; as well as on Gettr here.

Previous Covid scares have caused similar chaotic scenes in a Shanghai office building and an Ikea store in August 2022.

But the claim this video was filmed at a carnival in China has been debunked by Hong Kong fact-checking organisation Annie Lab.

It was in fact taken at a county fair in the US state of Texas, and shows people fleeing the grounds following a shooting scare.

A combination of reverse image and keyword searches on Google found a longer, 14-second version of the video published here on TikTok on September 24, 2022.

The Fort Bend County Fair is an annual event held in Rosenberg, Texas, United States. The 2022 fair started on September 23.

Below is a screenshot comparison of the video in the false post (left) and the TikTok video (right): 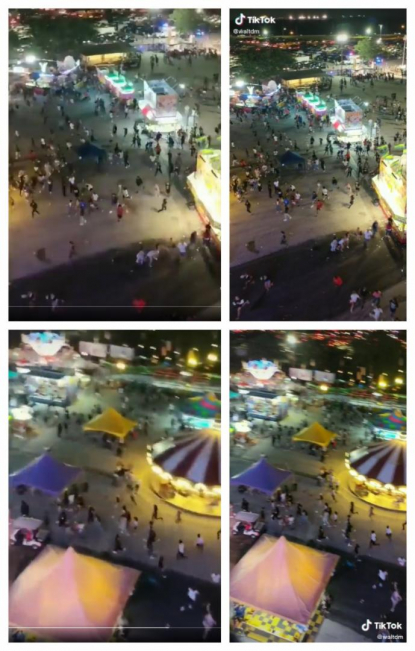 A screenshot comparison of the video in the misleading post (left) and the TikTok video (right).

The scene seen in the falsely shared video corresponds to a shot of the Fort Bend County Fair taken by local television station KHOU 11 from the ferris wheel on September 23.

Below is a screenshot comparison of the false video (left) and KHOU 11's report about the county fair (right), with similarities marked by AFP:

A screenshot comparison of the video in the false tweet (left) and KHOU 11's news report (right) with similarities circled by AFP.

Another similar video, also taken from the ferris wheel, was posted on Twitter in response to a tweet on September 24 about a possible shooting at the county fair.

The Fort Bend Country Sheriff's Office released a statement on September 24, 2022 that said an 18-year-old Houston man was arrested after allegedly threatening the county fair on social media.

"On Friday, Sept. 23, 2022, the Fort Bend County Emergency Communications Center received a 9-1-1 text message advising that an unknown person had made an Instagram post which appeared to threaten the County Fair. The post was widely shared on Instagram and caused alarm to the Fort Bend County community who observed the post," the statement reads.

In a statement on Instagram on September 24, 2022, the official Fort Bend County Fair page called the threat a "fabricated incident that caused panic on Friday, September 23, 2022".