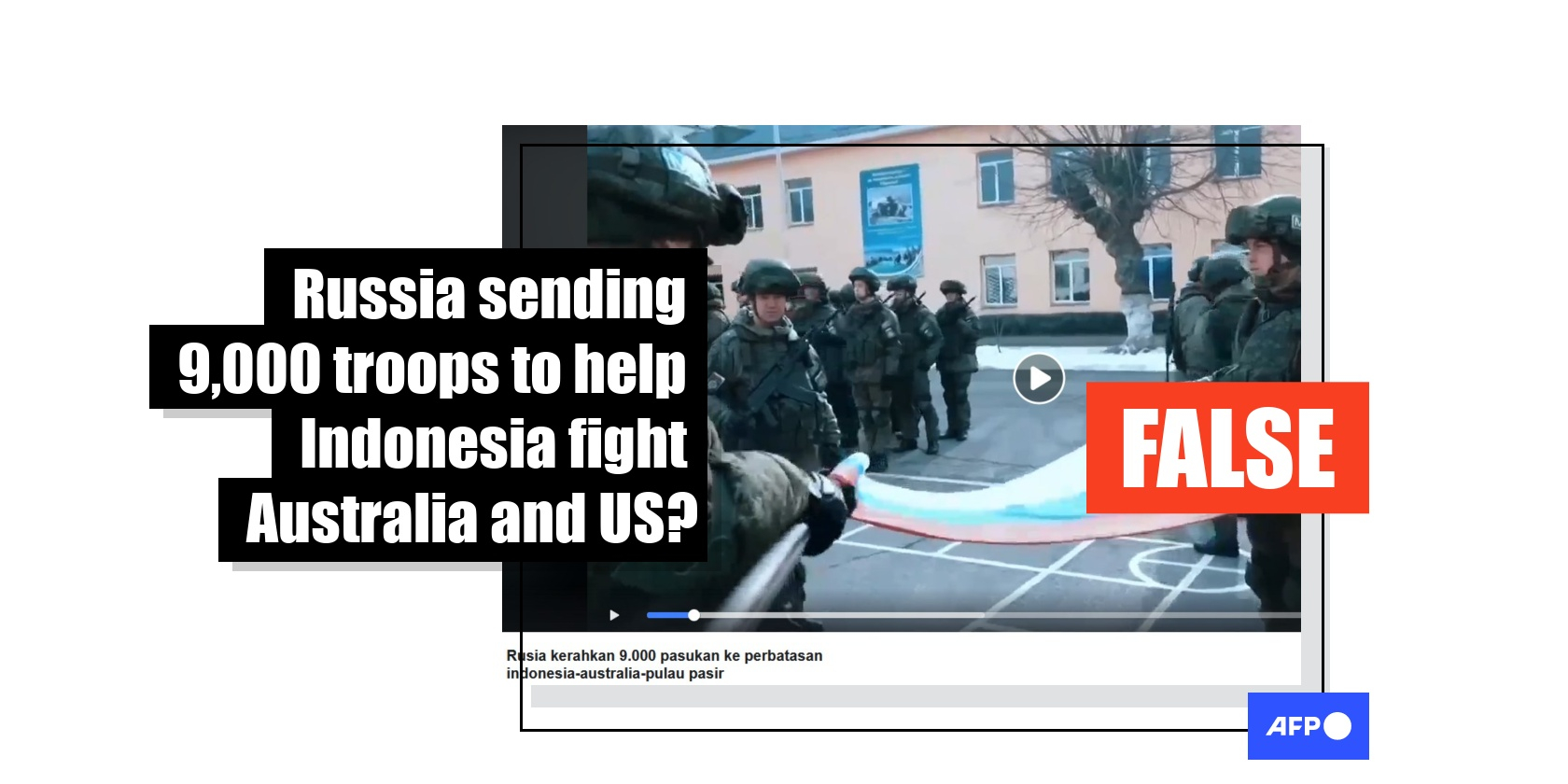 A video has been viewed more than a million times in posts that falsely claim Russia has deployed 9,000 troops to Indonesia to help the Southeast Asian country "defend its border against Australia and the US". In fact, the narration in the clip has been lifted from a news report about Russia sending troops to Belarus; scenes in the videos have also been taken from different events unrelated to the false claim. As of November 16, 2022, there have been no official reports that Russian troops have been deployed to Indonesia.

“Russia deploys 9,000 troops to the border of Indonesia-Australia-sand island," reads the headline of this Facebook post, uploaded on November 2, 2022.

It also shared a seven-minute video, which has been viewed more than 162,000 times. An Indonesian language voiceover heard in the video talks about Russia deploying troops to Indonesia.

At the clip's 11-second mark, the narrator says, "Protecting Indonesia from Australia and US attack, Russia deploys 9,000 joint troops to the border."

The video circulated on social media following reports from Indonesian media, such as this from state-run news agency Antara on October 21, 2022, that an Indonesian fisherman had intended to file a lawsuit against Australia over its "ownership of Pulau Pasir" -- a reference to Australia's Ashmore Reef.

The reef is part of MoU Box, an area in the Australian waters in the Timor Sea that can be accessed by Indonesian traditional fishers based on a 1974 agreement between the two neighbouring countries.

At the video's 28-second mark, a scene shows Indonesian President Joko "Jokowi" Widodo, saying: "I spoke with Russian President Vladimir Putin by telephone. In the conversation, we discussed requests of weapon aid from Indonesia."

Other scenes show Jokowi shaking hands with Putin and a large-scale military parade in Moscow.

One user wrote: "Salute....... To Mr Putin (this is a true friend)", while another said: “Thank you Mr Russian president for your help."

A similar claim also circulated alongside multiple videos posted on Facebook here and here, on YouTube here, as well as on TikTok here and here, where they garnered more than 872,000 views.

In fact, there have been no official reports that 9,000 Russian troops have been deployed to Indonesia as of November 16, 2022.

A review of the video found there were inconsistencies in the narrated voiceover.

At the clip's one-minute 48-second mark, the narrator says, “Russia has established a joint force with the Belarusian military, by deploying 9,000 troops and around 400 tanks to the border.

"The creation of the force followed a request from Belarusian President Aleksandr Lukashenko who asked for help from its allies Russia, due to Australia's multiple threats to Indonesia.”

A Google search for this part of the video found the narration has been doctored from this Indonesian-language report published by news site Tribunnews on October 26, 2022.

The report is headlined: "Protecting Belarussia from Ukraine’s attack, Russia deploys 9,000 joint troops to the border."

The deployment of Russian troops to its border with Belarus was also reported by The Guardian, Reuters and The Daily Mail.

The video replaces various uses of the words "Ukraine" and "Belarus" in the Tribunnews report with "Australia" and "Indonesia" respectively.

The original version of the video's narration says: "Russia has established a joint force with the Belarusian military, by deploying 9,000 troops and hundreds of tanks to the border with Belarus.

"The creation of the force followed a request from Belarusian President Aleksandr Lukashenko who asked for help from its allies Russia, due to Ukraine's multiple threats to Belarus."

Another factually incorrect part of the misleading video can be heard at its three-minute 19-second mark, where the narrator says, "It’s impossible for Indonesia to attack Australia. Nearly 40 percent of the border area between Australia and East Indonesia is covered by forest and swamp that cannot be infiltrated by enemies."

In fact, Indonesia only shares a maritime border with Australia.

This part has been manipulated from one of the last paragraphs of the Tribunnews report, which says: "In addition, nearly 40 percent of the border area between Ukraine and Belarus is covered by forest and swamp that cannot be infiltrated by enemies.”

Using keyframes from the misleading video, AFP found some of its scenes were taken from video reports about unrelated events.

At the misleading video's three-second mark, it shows scenes of Jokowi addressing the press with Putin.

At its eight-second mark, it shows a similar scene, but the two leaders are also joined by Indonesian Foreign Minister Retno Marsudi.

At the clip's two-minute 53-second mark, it shows Jokowi shaking hands with Putin in front of a blue background.

The scenes were taken from a video posted on President Jokowi's official Youtube channel on June 7, 2016.

Titled "President Jokowi in Russia", it documents Jokowi's state visit to Russia in May 2016.

Scenes used in the misleading video actually show a press conference after a Jokowi-Putin meeting and a moment when Putin welcomed Jokowi at the ASEAN-Russia Summit on May 19, 2016.

Below are screenshot comparisons of the misleading video (left) and the genuine video from President Jokowi's YouTube channel (right): The scene at the misleading video's 15-second mark depicts what looks like a large-scale military parade in Moscow.

The scene was actually taken from a video published on the Kremlin's official website on May 9, 2016. It is headlined: "Military parade on Red Square".

According to the website, the event was a military parade to mark the 71st Victory Day, celebrating Russia's win over Nazi Germany in 1945.

Below are screenshot comparisons between the misleading video (left) and the original Kremlin video (right): 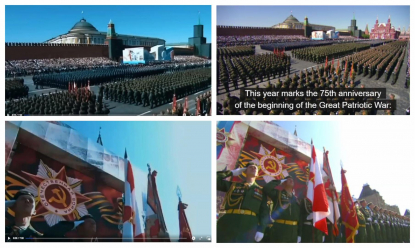 The scenes in the misleading video showing Jokowi saying he has "spoken with Putin through telephone" are taken from the Indonesian president's remarks published by Kompas TV on April 29, 2022.

The video is headlined: "Jokowi’s full statement after telephoning Ukrainian and Russian presidents Zelensky and Putin about G20".

Jokowi says at the misleading video's 40-second mark: "In the conversation, we discussed requests of weapon aid from Indonesia." This statement actually referred to his conversation with Zelensky, not Putin.

The complete statement as heard in the original Kompas TV video at its two-minute 32-second mark: "In the telephone conversation with the Ukrainian President, I received updates on the recent situation in Ukraine.

"I stressed that the mandate of the Indonesian constitution and foreign policy principles prohibit the giving of weapon aid to other countries.

"But I said to him that Indonesia was ready to give humanitarian aid."

Below is a screenshot comparison between the misleading video (left) and the Kompas TV video (right):

Scenes of military ceremonies in the misleading video -- seen at the 24-second, 29-second and one-minute eight-second marks, actually depict a ceremony marking the departure of Russian troops withdrawn from Kazakhstan in January 2022.

The scenes can be seen in an Al Jazeera report here about the withdrawal ceremony, posted on YouTube on January 14, 2022.

Euronews also published a report about the ceremony here.

Below are screenshot comparisons between the misleading video (left) and the Al Jazeera video (right): 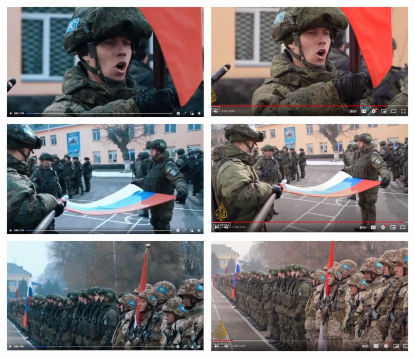