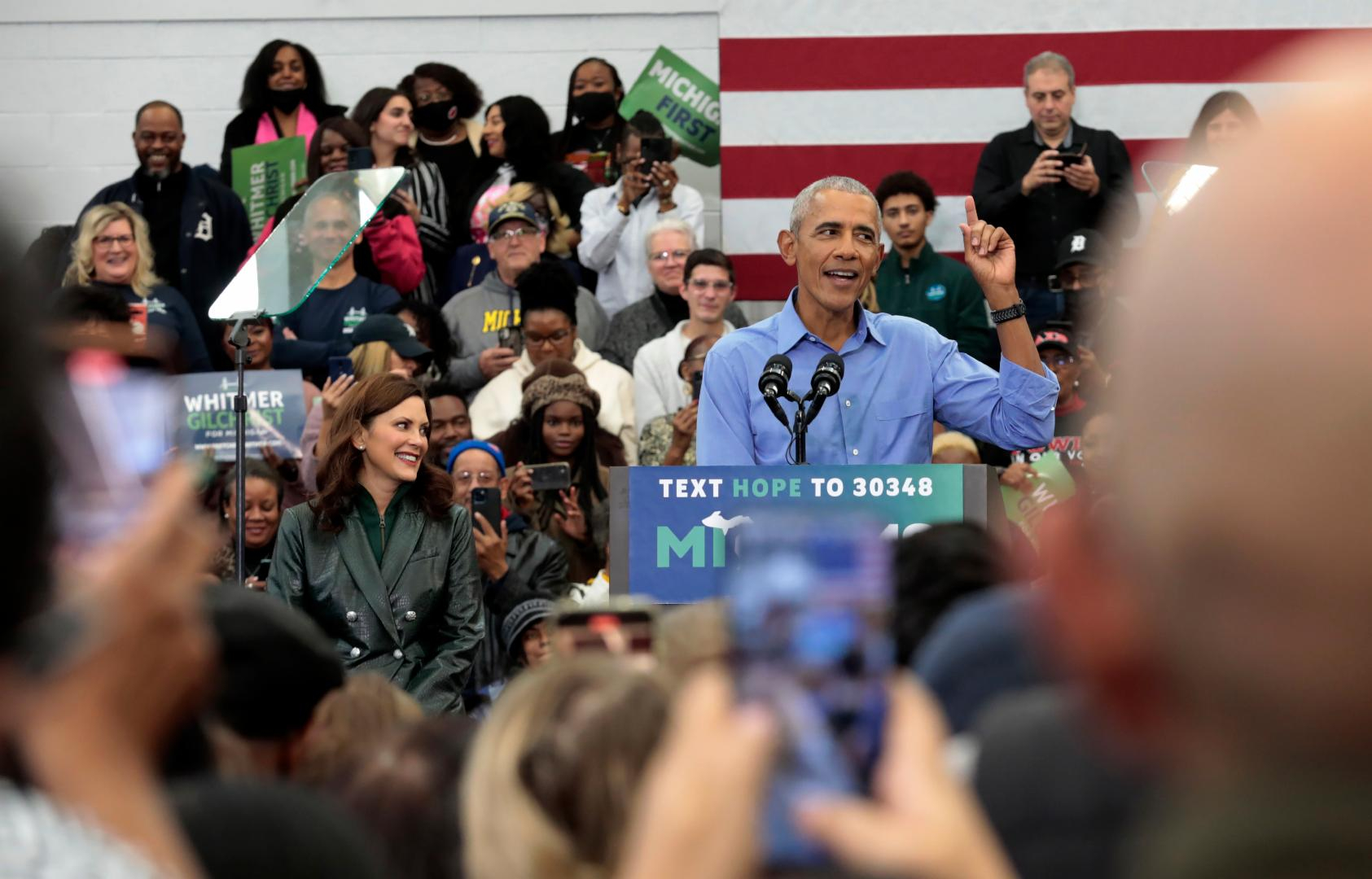 Former president Barack Obama campaigns for Michigan Governor Gretchen Whitmer during a rally ahead of the midterm elections, at Renaissance High School in Detroit, Michigan, on October 29, 2022 ( AFP / Jeff Kowalsky)

Audience did not chant against Biden during Obama speech

A video shared on social media appears to show Barack Obama losing control of a rally, as a profane slogan directed at President Joe Biden is seemingly chanted by the crowd. But the clip was manipulated to add the audio insulting Biden, and the former US president was responding to a protester challenging him about Russia.

In the clip shared on Twitter and viewed more than a million times since October 29, 2022, Obama appears to be struggling to continue a campaign speech as people can be heard chanting: "Fuck Joe Biden." 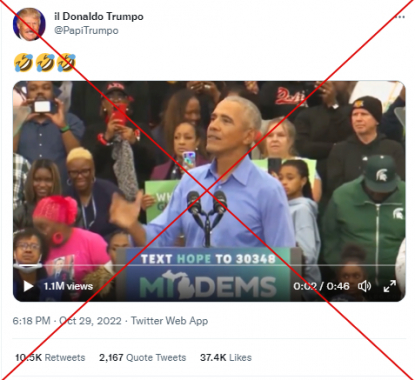 The clip was shared across social media platforms -- including on Instagram here and here -- and also in French and Spanish.

But the video has been manipulated, AFP found by searching for original, unedited clips of the event, and confirmed with individuals who were in attendance.

Obama returned to the stage in Detroit, Michigan on October 29, for a campaign event in the run-up to the midterm elections. AFP reported that a heckler interrupted him, but the crowd at the rally did not chant profanity directed at Biden.

Freelance photographer, Jeff Kowalsky, who took pictures of the event for AFP, told the agency: "That did not happen. There was a heckler. Someone added that audio," to the clip.

The full speech can be found here, including the sequence that was later misleadingly edited in social media posts, around the 25-minute mark.

The original sequence shows Obama seemingly bothered by a voice rising from the audience.

"Sir, sir, sir...," the former president says as he is interrupted by a voice off microphone. "There is a process that we've set up in our democracy. Right now, I am talking, you'll have a chance to talk sometime soon. We don't have to interrupt each other. We don't have to shout each other down. It's not a good way to do business."

In footage of the event by television network MSNBC, the camera also shifts and zooms in to the crowd.

Obama moves to redirect the crowd saying: "Just basic civility and courtesy works, and that's what we want to try to encourage."

In those clips, the complaints of the heckler are unheard, in part because the crowd starts chanting "Obama" in solidarity with the former resident of the White House.

Through a word search on Twitter, AFP found additional footage taken from amid the crowd, in which the man's complaints are clearly heard.

"Mr. President," the protester says, "there's more people that are gonna get hurt if we go into nuclear war. Right now, we're on the verge of nuclear war thanks to what you did in Ukraine in 2014."

AFP was also able to determine via Twitter that the protester in the video is Stewart Battle.

Battle confirmed via direct message on Twitter that it is he who can been seen shouting at the former president in the clip, and told AFP that the claims of crowds chanting against Biden were false.

"We were the only ones who spoke out, and we are not affiliated with MAGA, the Republicans, or any other 'conservative' cause. We are independents, and spoke against the drive towards war with Russia," Battle told AFP.