An old video of Rishi Sunak has resurfaced online following his appointment as UK prime minister in posts that falsely claim it shows him performing traditional Hindu rituals before entering his new office. The video -- viewed more than a million times -- was actually filmed in 2020. It shows then chancellor Sunak lighting earthen lamps outside his official London residence to mark the beginning of the Diwali festival of lights.

The 30-second clip -- showing Sunak lighting small lamps on a doorstep -- was shared on Twitter on October 26.

Its caption states in part: "The new UK PM #RishiSunak performing his spiritual/traditional rituals before entering his new office. We have largely abandoned ours. #Hindus".

Sunak -- a practising Hindu with Punjabi roots -- took charge as Britain's third premier in 2022 with his Conservative Party floundering in the polls and daunting challenges ahead.

Indians have delighted in the appointment of Britain's first prime minister of colour on October 25, a milestone moment in the history of the former colonial power that ruled most of the Subcontinent for nearly 200 years. 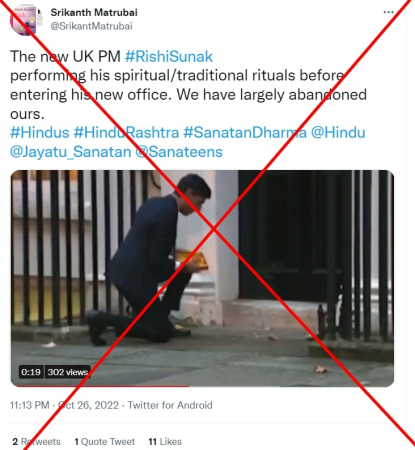 The video has racked up over 1.6 million views after it was shared with the false claim on Twitter here, and on Facebook here and here.

The video is old and multiple news organisations -- such as the Associated Press and Reuters -- have since debunked the claim.

A reverse search of keyframes -- followed by Google keyword searches -- found the video corresponds to longer footage published here by the US news agency Getty Images on November 12, 2020.

The caption of the one-minute 25-second footage states: "Rishi Sunak lights candles for Diwali; ENGLAND: London: Westminster: Downing Street: EXT Rishi Sunak MP (Chancellor of the Exchequer) out of Number 11, placing candles on the doorstep and lighting them (ahead of Diwali) and returning to Number 11."

The footage is credited to the UK-based television production company ITN.

Below is a screenshot comparison of the video in one of the false posts (left) and the footage published by Getty Images (right):

The same event was also reported in November 2020 by British newspaper The Guardian and Indian news organisations NDTV and India.com.