Legal experts say a claim shared across social media misleadingly suggests that several European nations, including France and the Netherlands, have withdrawn from a decades-old Energy Charter Treaty (ETC) because they are "jumping ship on climate commitments". In fact, the experts say, France and the Netherlands announced that a proposed amendment to the treaty does not accord with the Paris Agreement, making it "incompatible with (their) climate goals".

The misleading claim was shared by Ice Age Farmer, a Telegram channel that frequently shares anti-net-zero messages (see here and here) on October 22.

The post includes a screenshot of a tweet by Bart-Jaap Verbeek, a researcher at the Centre for Research on Multinational Corporations (SOMO) in the Netherlands on October 19.

The post reads, “BREAKING: Dutch Minister Jetten just announced that the Netherlands has decided to withdraw from the Energy Charter Treaty (ETC).”

Following the screenshot, the Telegram message reads, “EU nations are jumping ship on climate commitments as the #EnergyCrisis gets real and winter hits. First France this morning and now the Netherlands are exiting agreements …It’s amazing how fast these charades disintegrate upon contact with reality, just as the ESG narrative is crumbling when profits weren’t there.” 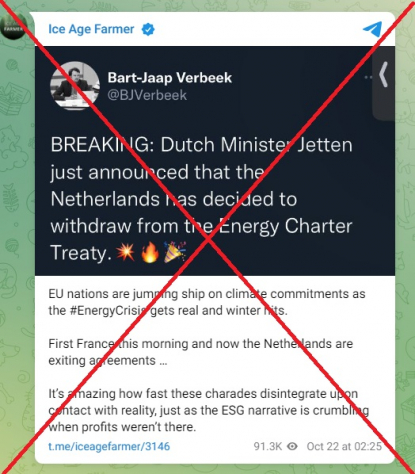 A screenshot of the misleading post, captured on October 31

The ETC, involving 52 nations mainly from Central Asia and Europe, was initially signed in 1994 to protect energy investments in volatile ex-Soviet countries.

On June 24, 2022, the European Union struck a compromise deal to update the treaty after two years of discussions. One of the new terms of the modernised treaty excludes new fossil fuel investments from protections and institutes a 10-year phase-out period for protections on existing investments.

The Telegram post has since been spread by a QAnon telegram channel, an unregistered Australian party founded by conspiracy theorist Riccardo Bosi, and social media users from the Netherlands, Sweden, the US, Brazil and the Philippines.

However, the claim is misleading, legal experts told AFP.

Rachel Thrasher, a law lecturer at Boston University, told AFP that the claim seems to be "completely the opposite" of the countries' motive for withdrawing from the ETC.

"Leaving the Energy Charter Treaty is a move to make policy space for more, better and more effective climate commitments," she said. "French and Dutch government officials have noted that the treaty is incompatible with climate goals (to the extent that their policies phasing out fossil fuels can be challenged in arbitration)."

"Leaving the ECT is currently the most viable option to ensure that states have the regulatory freedom to pursue the clean energy transition in the next decades," he said.

"The fact that these EU member states are now publicly announcing withdrawals is a clear sign that they reject the outcome of the negotiations promoted by the European Commission as not ambitious enough in climate terms."

The posts also misrepresent what EU leaders and ministers have said about their reasons for withdrawing from the treaty.

Rob Jetten, the Netherlands' Minister for Climate and Energy Policy, told parliament on October 18 that it was withdrawing because the ETC was not in line with the Paris agreement.

"The mandate for the European Commission was to bring the ECT in line with the Paris climate agreement," he said. "Despite many of the modernisations that are now in the negotiation outcome, we do not see how the ECT has been sufficiently aligned with the Paris Agreement."

Following the Netherlands' withdrawal, France also pulled out of the treaty on October 21.

French President Emmanuel Macron said the move was done to be more "coherent" with the Paris climate accord to combat global warming.

"And today I am watching with concern as we return not just to transitional energies, but to hydrocarbons and the most polluting fossil fuels," he said in a press conference. "And so the war on European soil must not make us forget our climate commitments and our imperative to reduce our CO2 emissions. Withdrawing from this treaty is part of this strategy."

France has pledged to reach net zero emissions by 2050.

In October this year, the United Nations warned the world was nowhere near the Paris Agreement target of capping warming at 1.5 degrees Celsius above pre-industrial levels, AFP reported.

Back in February, in a report dubbed an "atlas of human suffering", the UN's climate experts warned that global warming is outpacing our preparations for a world blighted by climate change.

The updated ETC agreement was meant to come into force in November if none of the signatories object, but still has to be approved on the EU side by the European Parliament and member states, AFP has reported.

Thrasher said if the parties did not agree with the modernised text, the treaty would stay as it is.

She said, "It is unclear whether the EU even has the competency to sign the treaty and bind its member states to the commitments when they have individually opted out."

Schaugg said, "The more EU member states announce withdrawals, the higher the pressure on the European Commission to change its stance and start planning for and implementing a coordinated withdrawal of the EU from the ECT."

However, even though the countries have left, members remain bound by a "sunset clause", which means they can still be sued by energy companies after quitting the treaty.

Thrasher said EU countries still have the option to neutralise the clause if they make a new agreement.

"If countries do not wish to be sued (by fossil fuel companies or anyone else), they can make a subsequent agreement among themselves that nullifies the sunset clause," she said.