Social media posts claim a Canadian law is evidence of secret weather modification programs. This is misleading; the legislation cited in the posts dates back to 1985 and requires companies to report techniques such as cloud seeding, which is used to initiate rain or limit hail damage.

"And there it is... weather modification via spraying," says an October 5, 2022 Facebook post shared hundreds of times.

The post includes a screenshot of what appears to be a webpage from the Canadian government titled "Weather Modification Information Regulations." 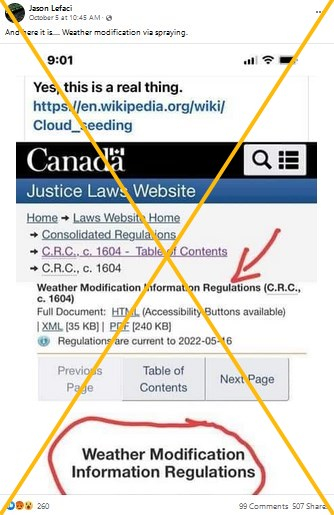 Similar claims have circulated on Twitter, where some users suggested a link between the supposed webpage and "chemtrails," an unproven conspiracy theory that claims governments and other actors spray toxic chemicals into the atmosphere.

The image shared online does show an authentic webpage from the federal Justice Laws Website. But the law it cites has nothing to do with secret weather modification programs.

The Weather Modification Information Act of 1985 defines weather modification as "any action designed or intended to produce, by physical or chemical means, changes in the composition or dynamics of the atmosphere for the purpose of increasing, decreasing or redistributing precipitation, decreasing or suppressing hail or lightning or dissipating fog or cloud."

Samantha Bayard, a spokeswoman for Environment and Climate Change Canada (ECCC), said the law requires such activity to be reported to the federal government.

"The act covers activities that are specifically intended to reduce the harmful impacts associated with hail, lightning and fog, which are short-term, local or regional weather events," she told AFP in an email.

Such activities include cloud seeding, which is also used in the United States to stimulate rainfall during droughts or to prevent hail damage.

This technique allows scientists to control where and when rainfall or storms occur.

Bayard said that since 1996, Weather Modification Inc -- a firm based in the US state of North Dakota -- has been "the only company undertaking weather modification activities in Canada, in the form of cloud seeding to reduce hail damage."

"The company seeds some developing thunderstorms in the Calgary Red Deer area between May and September of each year, and has provided the required reports to ECCC on a yearly basis," she added.

The effort to reduce hail damage in Alberta has been documented. According to local media, the insurance consortium that partners with Weather Modification Inc pays $5 million each year to fund the project with the goal of protecting urban communities.

Neil Craik, a law professor at the University of Waterloo, said linking the 1985 law to nefarious weather modification programs is "nonsense."

He added that such tactics "are not uncommon" and that there are "no nefarious weather modification programs in Canada."

AFP has fact-checked several false or misleading claims about the environment here.