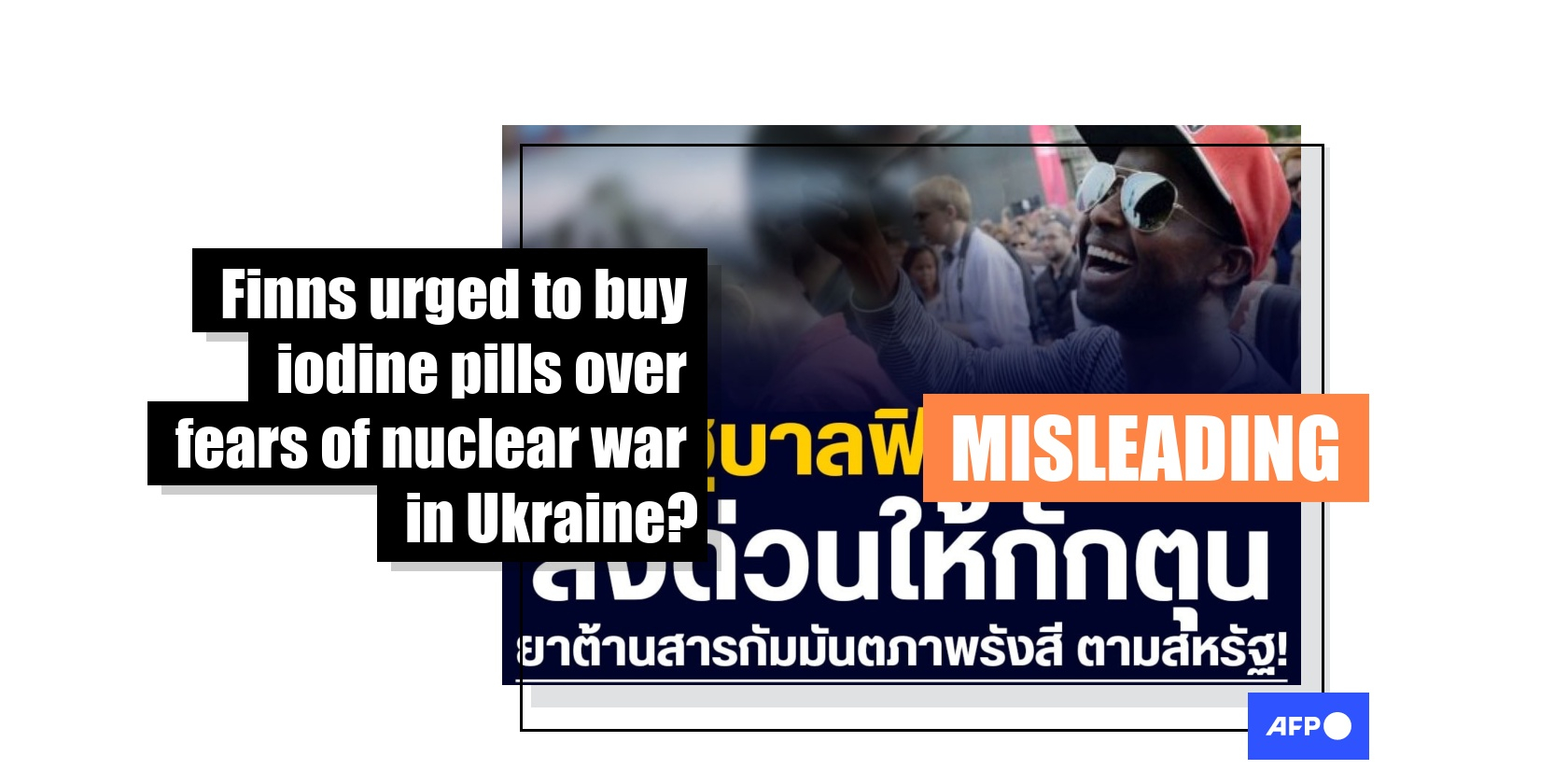 Several Thai posts have shared a misleading claim that the Finnish government advised its citizens to urgently buy iodine tablets after an escalation of the war in Ukraine. It circulated in October 2022 after the Nordic country updated its guidelines on the use of iodine in case of a radiation hazard. A government official told AFP that events in Ukraine would not compromise radiation safety in Finland. They added that their guidelines aim to ensure there is protection for the most vulnerable in case of an emergency resulting from a nuclear reactor accident, as they are heavily dependent on nuclear power.

The post was published here on October 14, 2022 by a Facebook page affiliated with a Thai right-wing group with more than 250,000 followers.

The post claims the Finnish government has "advised people to urgently buy iodine tablets after the war in Ukraine seemed to escalate".

Iodine tablets, which contain potassium iodide, can be taken to help block the body's absorption of radiation, according to the US Centers for Disease Control.

The misleading post claims the Finnish government's advice was based on World Health Organization (WHO) guidelines on the use of iodine tablets and came after the United States spent $290 million on radiation sickness drugs.

"This is the time to closely watch whether Russia resorts to using nuclear weapons to end the war in Ukraine."

A graphic attached to the post repeats the claim the Finnish government is urging the public to buy iodine tablets. 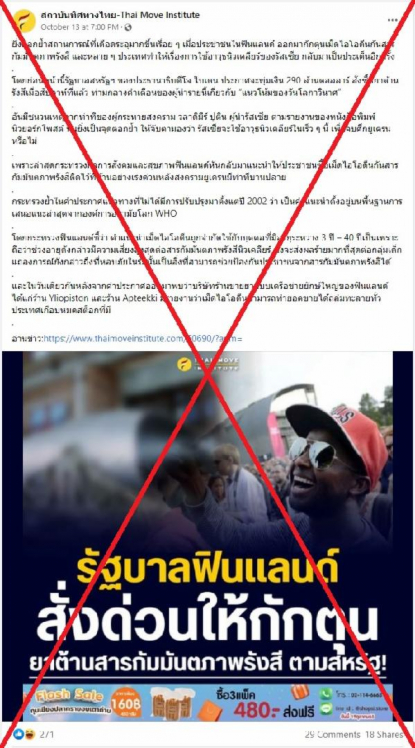 A video that made similar claims was viewed more than 29,000 times on YouTube here on October 12. Similar claims were also shared elsewhere on Facebook here and here.

An update to Finland's guidelines on the use of iodine tablets triggered a run on stocks at Finland's largest pharmaceutical chain, Yliopiston Apteekki, according to public broadcaster Yle.

The claim, however, that the Finnish government "urgently" advised its citizens to stock up on iodine tablets is misleading.

The guidelines on the use of iodine tablets were updated on October 11 by Finland's Ministry of Social Affairs and Health.

The ministry noted the previous guidelines had been in place for 20 years, and the updates were based on WHO recommendations from 2017.

The new guidance no longer recommends iodine tablets for people over the age of 40.

The ministry's statement does not urgently advise citizens to stock up on tablets, only saying: "The guidelines recommend that households with members between the ages of 3–40 procure iodine tablets for their homes."

Mikko Paunio, an official with the ministry, told AFP these guidelines are part of the country's long-standing aim to protect its most vulnerable citizens in case of a nuclear reactor accident.

"We are one of the leading countries in the world to rely on nuclear power," Paunio said. "Accordingly it is essential that we are prepared for the unthinkable and very low probable scenarios, i.e. nuclear reactor accidents."

A spokesperson for the Association of Finnish Pharmacies -- which was involved in updating the guidelines -- also told AFP the changes to the guidelines were a "regular update".

'No radiation threat' from Ukraine

Paunio said updating the guidelines had not been a priority for the government.

He explained that iodine tablets are only a second line of defence in radiation emergencies.

"Most important is to stay inside. This accounts (for) around 80 percent of the preventable exposure and iodide could add another 20 percent.

According to local media, Finland's Radiation and Nuclear Safety Authority also said there was no threat of radiation in the country from domestic or nearby nuclear power plants, "especially not Ukraine".

The authority tweeted on October 11 that stocking iodine tablets is part of "normal preparedness".