Several Facebook posts showing Russian TV presenter Elena Lenina have been shared alongside a false claim they show Ukrainian First Lady Olena Zelenska on vacation in Israel, as Russia's military continues to launch attacks on her country. The photo of Lenina was first leaked in 2016, and she posted an image of similar false posts on Instagram in October 2022 alongside a clarification.

The collage of an image of a woman lying on a beach -- with parts of her body censored -- and a headshot photo of Ukrainian First Lady Olena Zelenska was posted here on October 21, 2022.

The Thai-language caption reads: "Zelensky’s wife is in Israel right now and this is a photo of the Ukrainian First Lady during a holiday in Israel on 10/19/2022."

The author claimed the picture "was leaked to Russian reporters". 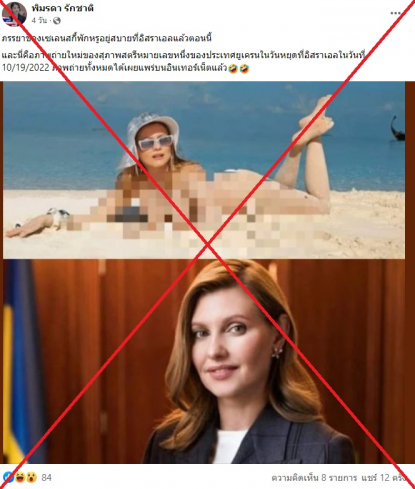 An identical image collage with a similar caption was also posted here, here, and here on Facebook.

A Twitter post with an identical image collage and claim has been retweeted more than 120 times and gained more than 320 likes.

Comments on the posts suggested that some people believed the photo of a woman on the beach to be Zelenska.

One comment reads: "Live luxuriously. Hunger for power. Doesn't care about people's suffering. Have money and everything.

"Flying to have some fun while losing the war, leaving people to suffer. Politician. Comedian."

Another decried how Zelenska was "sleep(ing) comfortably while people have no place to live. Throwing suffering to the people while having personal enjoyment".

The photo of the woman on a beach, however, does not show Zelenska.

A reverse image search on Yandex followed by a keyword search found the same image had been posted as far back as 2016 in articles about Russian TV presenter Elena Lenina.

Images of Lenina that were similar to the photo of the woman on a beach in the false posts were published here by Russian free-to-air television network REN TV in June 2016.

REN TV reported that the pictures of Lenina leaked during a renovation of her home, when construction workers were able to access her cellphone. 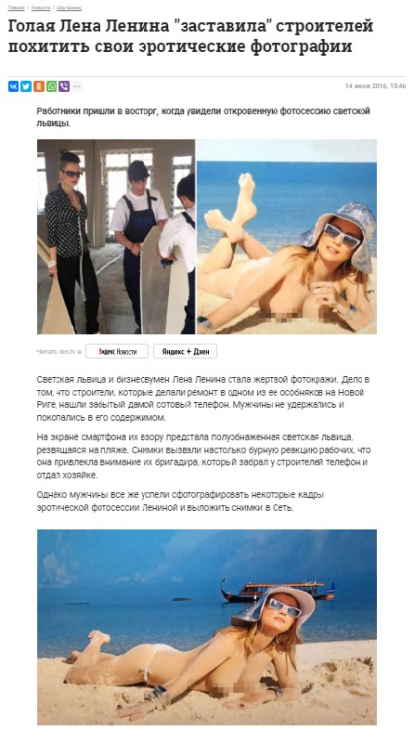 The comparison below shows similarities between the photo in the false post (left) and the image of Lenina from the Russian publication (right):

An identical, but flipped, version of the image was also posted on several pornographic websites.

On October 24, Lenina posted an Instagram story from her verified account about the false claim, saying in part: "My photo is being exploited".

Screenshot of Lelina's response to the fake news on her Instagram story, captured on October 24, 2022

The Ukrainian embassy in Thailand also told AFP that the image did not show the country's first lady, Olena Zelenska.

"Undoubtedly, the person from the (image) is not Mrs Olena Zelenska," said Dmytro Deineko, an embassy official.