After Moscow announced in September 2022 that it would call up some 300,000 reservists to fight in Ukraine, a video was viewed tens of thousands of times in social media posts that claim it shows a suicide bombing in Russia that targeted a recruitment officer. The claim, however, is false. While there were protests against the "partial" mobilisation in Russia, this video has circulated since at least 2021 in reports about a bombing in Syria.

"This is a real Russian man who set off the bomb and perished with the thief who forcibly took his son away," reads the caption to a video shared on Twitter here on October 2, 2022.

The eight-second clip, which has been viewed more than 11,000 times, appears to show several people scuffling before one of them sets off an explosion.

Simplified Chinese text above the clip read: "Ferocious! A Russian father grabbed a recruitment officer who was about to take his son away and set off a grenade, killing both of them!!!" 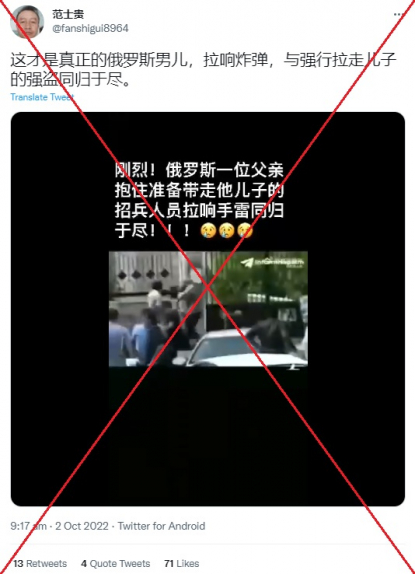 It circulated after Russian President Vladimir Putin announced on September 21 that reservists would be called up to bolster Russian forces in Ukraine after they were pushed back from most of the eastern Kharkiv region.

Defence Minister Sergei Shoigu said that 300,000 reservists would be drafted and the "primary" goal is to help "secure" territories behind and on the frontline.

The announcement of a "partial" mobilisation sparked panic and demonstrations in Russia, with more than 2,000 protesters detained across the country.

A woman who identified herself as the shooter's mother said he had been "very upset" after his friend --- who had no prior military experience -- received call-up orders.

The video, circulating on social media, however, predates the announcement of a partial mobilisation in Russia.

The Syria TV video includes several clips that match up with the video shared in misleading social media posts in September 2022, but does not show the explosion.

Below are two screenshot comparisons of the video shared in the online posts (left) and the video published by Syria TV (right): 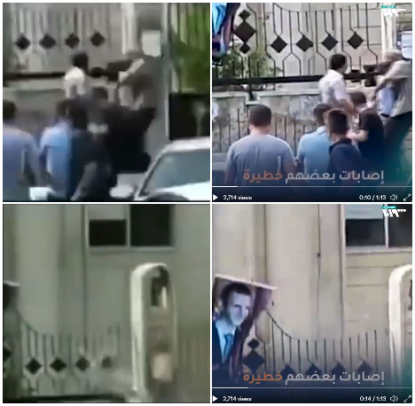 The tweet's Arabic-language caption reads, "Throwing a bomb at a lawyer in front of #courthouse in #Tartus. It killed two people and injured 11 others. But why? #Television_Syria @syriastream".

Tartus is a city in western Syria.

The bombing was also covered by Syria's state-run Syrian Arab News Agency in an Arabic-language report here on September 23, 2021.

As of October 5, 2022, AFP journalists have not found any reports about suicide bombings in Russia following the announcement of the partial military mobilisation.

According to the Latvia-based news website Meduza, however, a man in the western Russian city of Ryazan set himself on fire because he did not want to be sent to war.

AFP previously debunked the false claim that the video shows a suicide bombing at the entrance of the Syrian presidential palace here.