Skip to main content
Syrians walk in front of a poster of President Bashar al-Assad near the Grand Umayyad Mosque in Damascus on September 23, 2021. ( AFP / LOUAI BESHARA)

Video does not show 'suicide bombing outside Syrian presidential palace'

A graphic video has been viewed tens of thousands of times in Facebook and Twitter posts that claim it shows a suicide bombing at the entrance of the Syrian presidential palace. The claim is false: the video shows a fatal blast outside a courthouse in Syria's western city Tartus. The presidential palace is located in the nation's capital Damascus.

The video was posted here on Twitter on September 26. It was viewed more than 140,000 times before it was removed.

The Syrian presidential palace in Damascus is the official residence of President Bashar al-Assad.

The video appears to show three men arguing before a blast erupts. 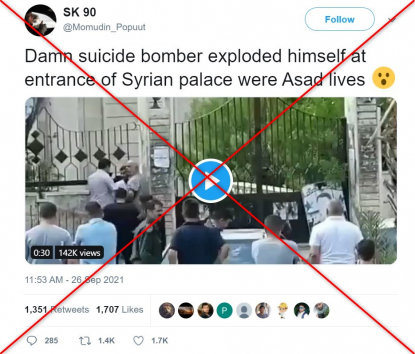 Screenshot of the tweet falsely claiming to show footage of a blast outside Syria's presidential palace. Taken on September 29, 2021.

It was shared here by Rupin Sharma -- a senior member of the police force in India's Nagaland state.

It was also shared here by Syed Zaid Zaman Hamid -- a right-wing political commentator in Pakistan.

The video shows a bombing outside a courthouse in Tartus, a city in western Syria.

Footage showing identical scenes from the video was posted here on September 24 by Syria TV.

"Throwing a bomb at a lawyer in front of #courthouse in #Tartus. It killed two people and injured 11 others. But why? #Television_Syria @syriastream," reads the tweet's Arabic-language caption.

Below is a screenshot comparing the footage in the misleading posts (left) and the footage from Syria TV (right): 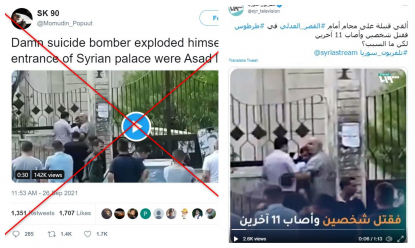 Screenshot comparing the footage in posts claiming to show an explosion outside Syria's presidential palace (L) with the original from Syria TV (R). Taken on September 29, 2021 ( AFP / )

"The explosion led to the death of two people and the injury of a number of policemen and officers and civilians present in the area," it reported.

There have been no credible reports of a bomb blast at the Syrian presidential palace in September 2021.