Skip to main content
A full super moon, rises behind a mountain in the Swiss Alps, seen from Chexbres, western Switzerland, on July 13, 2022 ( AFP / Fabrice Coffrini)

"Ooops… this interview definitely didn’t go as planned… The climate cultists are going to hate this..." says a September 9, 2022 tweet shared more than 25,000 times.

The post includes a clip of a Corbyn interview with Russia Today (RT), a media outlet which has been linked to Moscow's "disinformation and propaganda ecosystem." 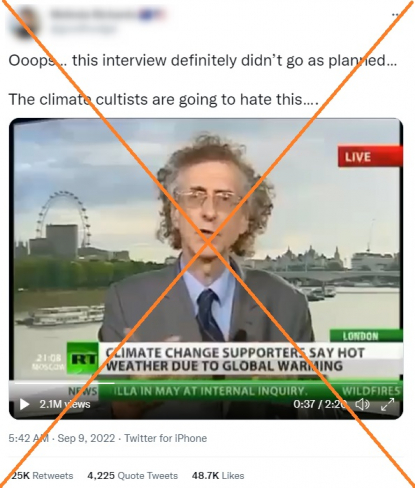 The clip was shared on YouTube, where it was later removed, and in climate-skeptical groups and pages on Facebook. The video circulated online, including in French, following heat waves in Europe in summer 2022.

Corbyn has made several appearances on RT, a Russian state-owned television network, over the years. The clip shared on Twitter is not new -- it aired in early August 2010.

Several scientists told AFP Corbyn's claims about the cause of global warming do not make scientific sense.

"Scientists have worked very hard to rule out all other possibilities. It is not the variability of the sun. It has nothing to do with the sun or the moon," said Travis Rector, an astronomer at the University of Alaska-Anchorage. "And the only explanation that is possible is the addition of these greenhouse gases through human activity."

Piers Corbyn is the brother of UK politician and former Labour Party leader Jeremy Corbyn. The former has spread false claims about climate change for decades.

He obtained a degree in physics from Imperial College London in 1968, as well as a postgraduate degree in astrophysics from Queen Mary College in 1981. However, he is not a climate scientist and has very little related scientific research or peer-reviewed papers to his name, AFP found.

On his weather forecast platform WeatherAction, Corbyn presents climate change as "propaganda." And in recent years, he has shared conspiracy theories about the coronavirus pandemic, health and safety measures, and vaccines. 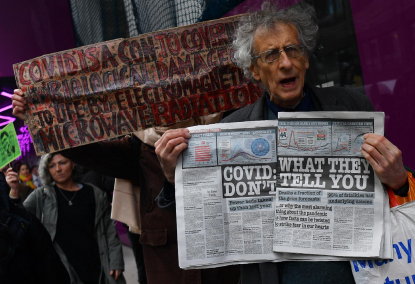 Piers Corbyn, brother of former Labour Party leader Jeremy Corbyn, speaks to the media as he leaves an anti-vaccine demonstration that had been held outside the offices of the Bill and Melinda Gates foundation in central London on November 24, 2020 ( AFP / Justin Tallis)

In a March 2020 tweet, Corbyn falsely claimed the health crisis was a "simulation" by "mega-rich control freaks" Bill Gates and George Soros.

In February 2021, he was arrested for comparing vaccination to the Holocaust, according to The Guardian

During his interview on RT, Corbyn claimed "circulation patterns" related to "solar activity" and "certain stages of the moon" are primary drivers of climate change. The sun can influence Earth’s climate, but experts told AFP it is not the primary cause of global warming.

Christopher Merchant, professor of ocean and Earth observation at the University of Reading, said "circulation patterns" refer to "the way in which air moves around the planet."

"A circulation pattern is a meteorologist’s way of describing a weather or seasonal event from the point of view of the atmosphere," he said.

But the phrase "isn’t an explanation of anything" related to climate change, Merchant said.

Rector of the University of Alaska-Anchorage told AFP scientists "definitively" know the addition of greenhouse gases such as CO2 and methane to the atmosphere "primarily through the use of fossil fuels" is responsible for global warming.

"It is contributing to the extreme weather events, like the flooding in western Alaska and in Puerto Rico and the heat waves that have been occurring throughout Europe," he said. "And we also know that there is no other way to explain it."

Skeptics on social media often describe climate change as a "natural" phenomenon. But according to the US National Oceanic and Atmospheric Administration (NOAA), human activity is causing global warming by "amplifying Earth’s natural greenhouse effect."

"Virtually all climate scientists agree that this increase in heat-trapping gases is the main reason for the 1.8°F (1.0°C) rise in global average temperature since the late nineteenth century," the agency says.

The warming observed in recent decades is too rapid to be linked to changes in Earth’s orbit and too large to be caused by solar activity, according to NOAA. 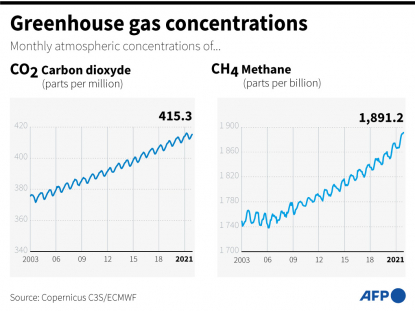 Atmospheric concentration of carbon dioxide and methane monthly, since 2003 ( AFP)

"In the industrial era, human activities have been, and are increasingly, the dominant cause of climate warming," the agency says online. "The increase in radiative forcing due to these activities has far exceeded the relatively small net increase due to natural factors, which include changes in energy from the sun and the cooling effect of volcanic eruptions."

Extreme weather events have always existed, but they are getting worse. Heat waves, for example, occur more frequently because of human-induced global warming, as seen in these graphics from the US Environmental Protection Agency (EPA).

"There have been instances of extreme heat waves throughout history, but when we look at the broader trend over the past century, we can see that global average temperatures have been steadily increasing, and heat waves are becoming more frequent and more intense as the global baseline temperature goes up," said Maren Hale, a climate researcher at the University of California-San Diego's Scripps Institution of Oceanography.

The best estimate of human-induced warming is 1.07 degrees Celsius, according to the latest report from the Intergovernmental Panel on Climate Change (IPCC). More than 700 scientists from 90 different countries assemble the report.

Naomi Oreskes, a geologist, science historian and professor at Harvard University, was a pioneer in defining scientific consensus on climate change and human activity. In 2004, she conducted an analysis of 928 peer-reviewed abstracts published between 1993 and 2003.

"Remarkably, none of the papers disagreed with the consensus position," she wrote at the time.