Earlier this month, as Kenyans waited for the Supreme Court ruling on the petition filed by Raila Odinga challenging William Ruto’s election as president, an image of a newspaper headline alleging that Ruto threatened Chief Justice Martha Koome back in 1999 started circulating on social media. The claim, however, is false: AFP Fact Check found that the purported front page was fabricated. The original was an edition from 1993, with an unrelated headline.

“THIS was Wednesday, February 10, 1999. The assistant minister was William Ruto. The ‘rogue’ lawyer was Martha Koome (sic),” reads part of a post published on Facebook on September 3, 2022. 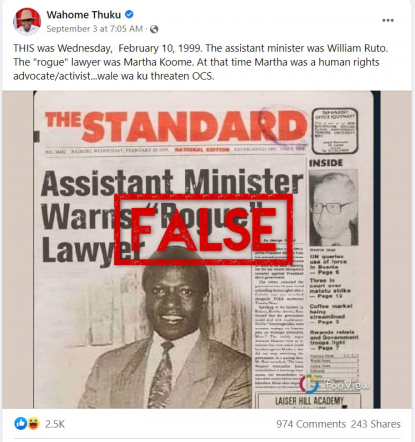 The post contains an image of what looks like an old front page from Kenyan newspaper The Standard. The purported headline reads: “Assistant minister warns ‘rogue’ lawyer.”

The main picture shows a younger Ruto, who was sworn in as Kenya’s fifth president on September 13, 2022.

In 1999, the post claims, he was an “assistant minister” while the so-called “rogue” lawyer at the time was Martha Koome – now the country’s chief justice who led a bench of the Supreme Court in ruling against a petition by rival candidate Raila Odinga to set aside Ruto’s election victory.

The post implies that the court ruled in Ruto’s favour because of the unspecified incident with Koome more than two decades ago.

AFP Fact Check conducted a reverse image search and found the original front page from February 10, 1993 – and not 1999. 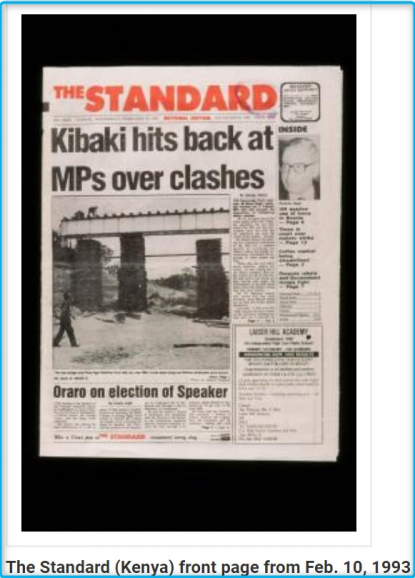 The headline in that edition read: “Kibaki hits back at MPs over clashes.” The main image shows progress on the reconstruction of a railway bridge.

There is no mention or photo of Ruto anywhere on the page.

The newspaper confirmed its version of the front page from 1993 was the authentic one.

Furthermore, among the elements on the front page is an advert from “Laiser Hill Academy” congratulating pupils and teachers for “excellent” results in 1992, not 1999.

Another inconsistency on the front page include a picture of Boutros Boutros-Ghali as the head of the UN, a post he held from 1992 to 1996. 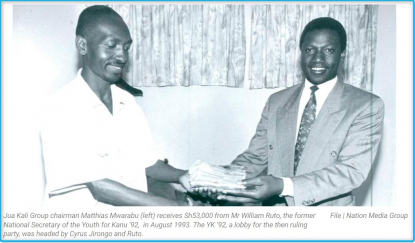 Screenshot showing the original photo from the Nation newspaper

Ruto was elected as the Eldoret North constituency member of parliament in 1997 and served as an assistant minister in the office of the president under Kenya’s second president Daniel Arap Moi from 1998 to 2002.

Koome meanwhile joined the Kenyan judiciary in 2003 after practising as a lawyer for more than a decade.

She was appointed chief justice in May 2021 by former president Uhuru Kenyatta, making her the first woman to hold the position in Kenya.