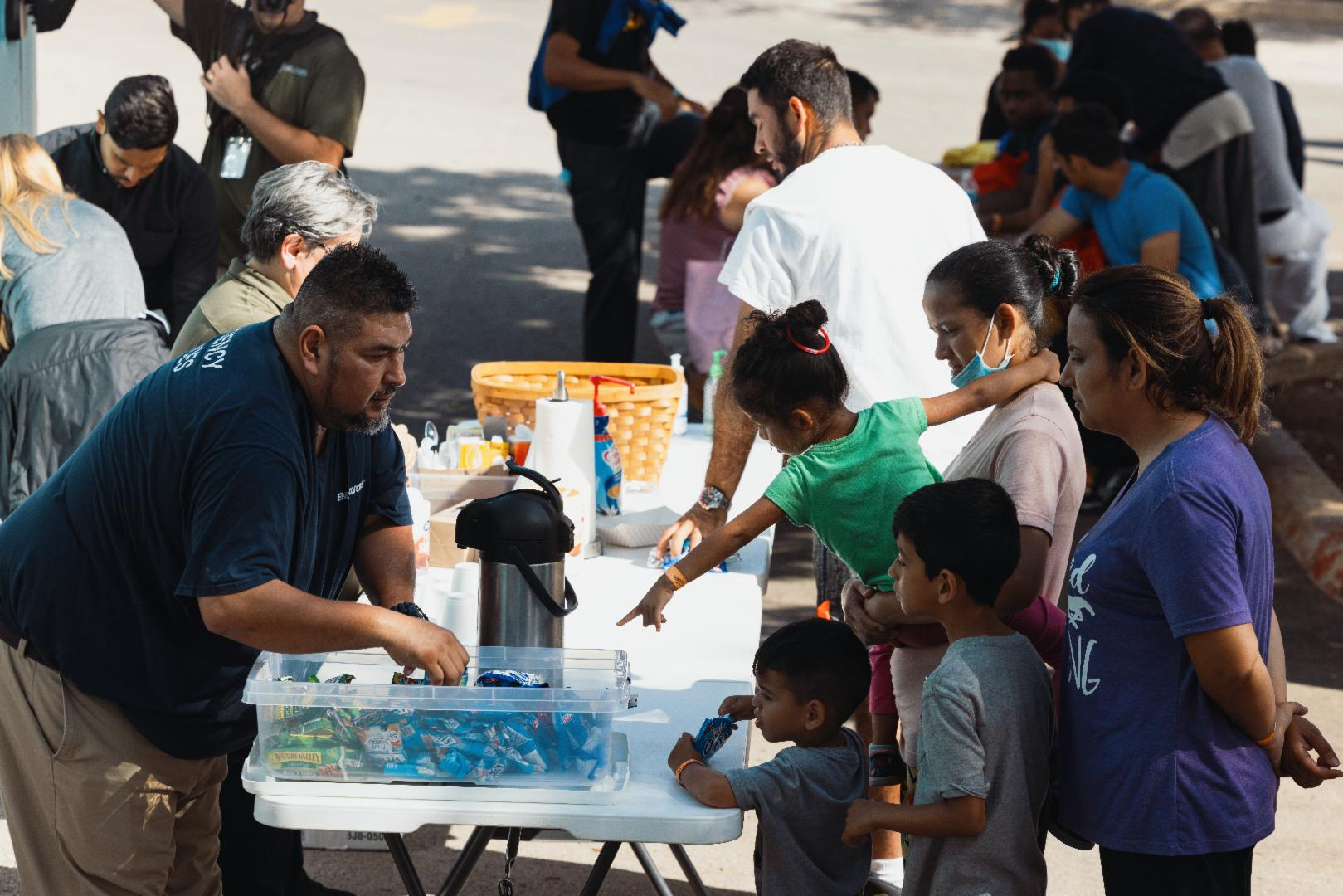 Groups of migrants receive food from the San Antonio Catholic Charities outside the Migrant Resource Center on September 19, 2022 in San Antonio, Texas -- the origin of two planeloads of mostly Venezuelan migrants who were sent via Florida to Martha's Vineyard in Massachusetts ( AFP/Getty / Jordan Vonderhaar)

Online posts claim the island of Martha’s Vineyard, Massachusetts, is a designated "sanctuary" for undocumented migrants, and that a group flown there by Florida Governor Ron DeSantis has since been "deported." This is misleading; at least three towns on Martha's Vineyard have passed sanctuary policies, but the entire island has not declared itself as such -- and the migrants have been relocated to the nearby Joint Base Cape Cod.

"Martha's Vineyard Declared itself as a sanctuary city Until the buses arrived," says a September 19, 2022 Facebook post. 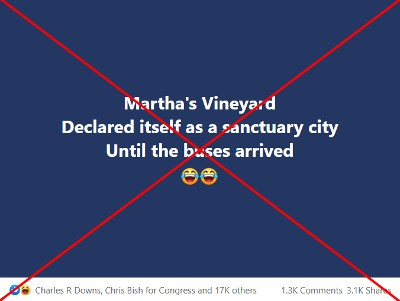 Similar posts circulated on Facebook and Instagram in English and Spanish. Many include photos of the New York Post's September 17, 2022 issue, which had a headline that said: "Liberals deport migrants."

"So much for 'sanctuary,'" says text above the headline of the New York tabloid front page. 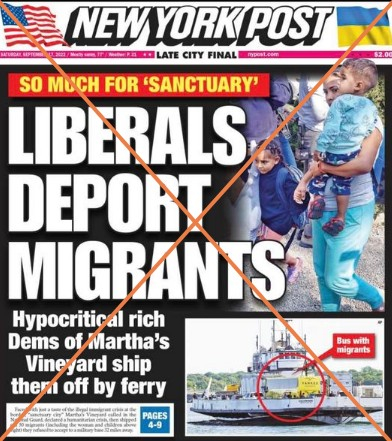 On September 4, 2022, DeSantis flew about 50, mostly Venezuelan migrants from Texas to Martha's Vineyard as part of a political battle over immigration ahead of the US midterm elections.

Since then, several lawsuits have been filed against DeSantis on behalf of migrants who allege they were sent to Martha's Vineyard under false pretenses by the Florida governor, who is now under investigation. DeSantis has justified his actions by describing the island, a Democratic stronghold and popular vacation spot for the country's political elite, as a "sanctuary" destination for undocumented immigrants.

At least three of the six towns on Martha's Vineyard have passed measures resembling sanctuary policies. However, neither Massachusetts nor the island as a whole has declared itself a sanctuary -- and despite online claims, the migrants involved have not been deported.

While there is no universal definition of a sanctuary jurisdiction, the nonprofit American Immigration Council says many cities, counties and states that have such policies limit local law enforcement's cooperation with federal immigration authorities. In Los Angeles, for example, police are barred from contacting someone simply to ask about their immigration status.

Ragini Shah, a clinical professor of law at Suffolk University in Boston, told AFP she was aware of eight sanctuary cities in Massachusetts.

They include Amherst, Boston, Cambridge, Chelsea, Concord, Newton, Northampton and Somerville. None of those cities are located near Cape Cod.

In 2017, three towns on Martha's Vineyard -- Edgartown, Tisbury and Chilmark -- did vote in favor of measures that would "request the Selectmen to authorize law enforcement and all Town officials to refrain from using Town funds and/or resources to enforce federal immigration laws, in keeping with current practice, unless presented with a criminal warrant or other evidence of probable cause, as required by the Fourth Amendment of the United States Constitution."

The Lutheran Immigration and Refugee Service (LIRS) defines a sanctuary as "a community with a policy, written or unwritten, that discourages local law enforcement from reporting the immigration status of individuals unless it involves investigation of a serious crime."

Under this definition, Edgartown, Tisbury and Chilmark could be considered sanctuaries -- despite not being listed as such by the Center for Immigration Studies, a group that argues for low levels of immigration. Experts say such ordinances are similar to state or federal laws.

Mary Holper, director of the immigration clinic at the Boston College Law School, told AFP that a policy preventing town authorities from assisting immigration officers would be considered a sanctuary policy, "very much in keeping with the way cities and states would describe themselves as sanctuary cities or sanctuary states."

However, Daniel Farbman, an associate professor at the Boston College Law School and an expert in local government, noted the adopted article only "requests" the selectmen authorize town police to not cooperate with federal immigration authorities. He said that, while there is no standardized "sanctuary policy," the Edgartown ordinance is relatively weak.

"There is no promise to resist federal law or protect undocumented immigrants," he said.

On the state level, Massachusetts' Supreme Judicial Court ruled in 2017 that state court officers could not legally collaborate with federal detainers, a key tool that US Immigration and Customs Enforcement (ICE) uses for deportation. But Massachusetts has not passed a law establishing sanctuary status as some other US states have, such as California, Colorado and Illinois.

Ivan Espinoza-Madrigal, executive director of Lawyers for Civil Rights -- a Boston-based firm that has filed a federal class action lawsuit against DeSantis -- confirmed to AFP that Massachusetts does not have state-wide law granting protections for undocumented immigrants. He also said the migrants flown to Martha's Vineyard have not been deported.

"They were moved to a base on Cape Cod. I personally escorted the migrants to the base," he said.

Today, our administration announced new shelter and humanitarian supports at Joint Base Cape Cod for the migrants who arrived this week in Martha's Vineyard.

The migrants agreed to move to the military base as a temporary solution while they determine their next steps.

AFP has fact-checked other claims about US immigration here and here.