Skip to main content
United States Border Patrol agents on horseback try to stop Haitian migrants from entering an encampment on the banks of the Rio Grande near the Acuna Del Rio International Bridge in Del Rio, Texas on September 19, 2021 ( AFP / Paul Ratje)

Social media posts claim there are 600,000 undocumented Canadians living in the United States, contrasting this with Haitians being rounded up by mounted Border Patrol agents in Texas and suggesting that racism was to blame. But estimates of undocumented Canadians range in the tens rather than hundreds of thousands, and the 600,000 figure includes people from other countries.

"If you still don't think Border Patrol whipping Black Haitian asylum seekers is rooted in white supremacy then remember that asylum is legal & there are ~600K undocumented (mostly white) Canadians in America & you never once saw BP whip them, cage them, or block them from entry,"  Virginia lawyer Qasim Rashid tweeted on September 20, 2021. 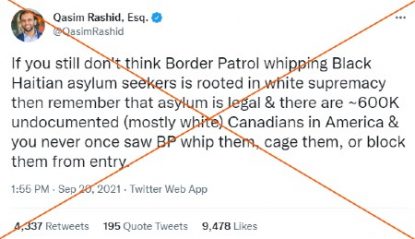 Thousands of people retweeted the claim, which was also spread as a screenshot on Instagram and Facebook, including by Rashid himself.

The tweet refers to US Border Patrol agents on horseback cracking their reins as they rounded up Haitians on the bank of the Rio Grande River -- an incident that US President Joe Biden condemned as "outrageous."

More than 10,000 migrants, many of them Haitians, poured into the border city of Del Rio in September, before being crowded into a now-cleared area under a bridge controlled by border agents.

But the claim about there being 600,000 undocumented Canadians in the United States is inaccurate.

Rashid explained in a response to a comment asking for a source that the 600,000 figure comes from the Migration Policy Institute (MPI), which compiled numbers on unauthorized populations in the United States based on a 2018 study and the US Census Bureau's 2014-2018 American Community Survey.

MPI data shows that the figure is 648,000, but includes people born in Europe and Oceania, a region that includes Australia and New Zealand.

Instead, MPI estimated that there were 57,000 undocumented Canadians in the United States as of 2018, the think tank's spokeswoman Michelle Mittelstadt told AFP.

The full MPI report does not show Canada in the top 10 most common origin countries for unauthorized immigrants either, with Brazil in 10th position with 145,000 people.

US Department of Homeland Security (DHS) numbers on individuals overstaying their visas showed that 84,000 Canadians did so in 2019.

At the higher end of estimates, the Pew Research Center estimated that 100,000 Canadians illegally resided in the US in 2014.

AFP contacted DHS and Canada's Global Affairs agency, both of which declined to provide an estimate on undocumented Canadians in the United States.

Regarding the idea that Canadians have it easier than people from other countries, Mittelstadt said that "if you look at it through the prism of whether individual groups are more or less likely to face the prospect of arrest and deportation, certainly immigration enforcement falls heaviest on unauthorized immigrants of Latino origin."

She added that Mexicans and Central Americans accounted for between 85 and 87 percent of Immigration and Customs Enforcement arrests in 2013-2016.

Mittelstadt said that many of the Haitians currently trying to cross the border came from other Latin American countries, notably Chile and Brazil, where they had been for years.

"It's a combination of economic struggles and discrimination in South America, and the perception of easing immigration policies in the United States (under Biden) that catalyzed the current Haitian movement, alongside new instability in Haiti with the assassination of the president," she said.