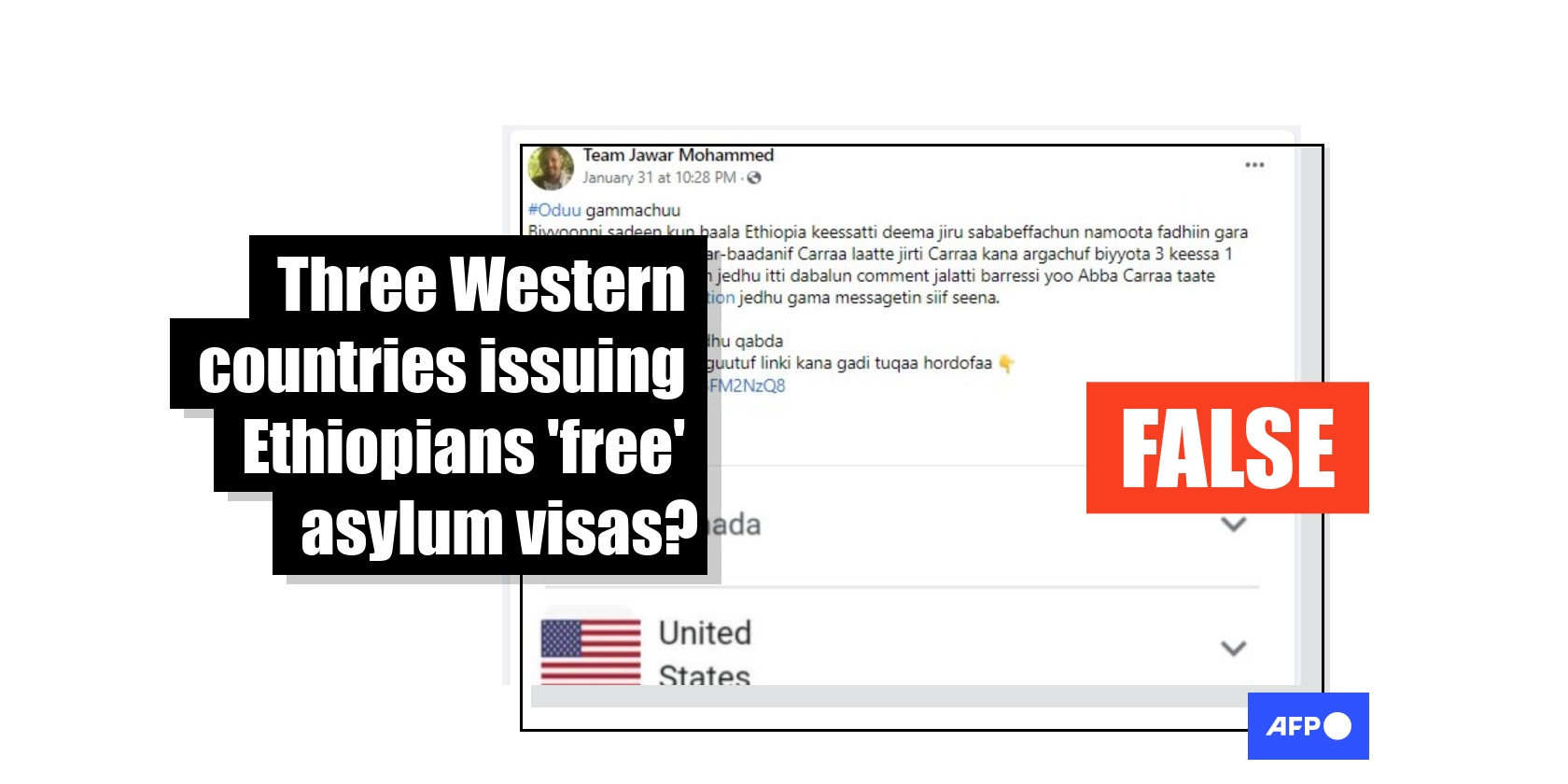 US, Canada and Australia are not offering ‘free’ asylum visas to Ethiopians fleeing Tigray conflict

A post shared on Facebook hundreds of times in Ethiopia claims that the US, Canada and Australia are issuing “free” asylum visas to Ethiopians affected by the ongoing conflict in the country. But the claim is false; all three countries denied this was the case. Furthermore, AFP Fact Check established that the Telegram channel that purportedly links to asylum applications actually promotes a “fake Canada visa lottery”. 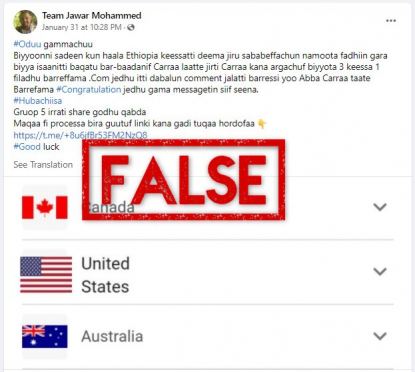 The post, written in Afaan Oromoo, translates to: “The following three countries are providing free immigration opportunities to all interested Ethiopian nationals in recognition of the prevailing situation in Ethiopia.”

It adds: “To be considered for the opportunity, please comment under this post by selecting the name of one of the three countries followed by .com.”

According to AFP, the fighting has killed thousands of people and pushed many more to the brink of famine. The United States Agency for International Development (USAID) recently said that at least 108 civilians were killed in airstrikes in Tigray in January 2022.

The post, accompanied by images of the flags of Canada, the US and Australia, asks Facebook users to share the information with five other people or groups within their circles. To complete the application process, the post directs applicants to a Telegram channel called “Canada Viza Lottery 752K (sic)”.

However, the link is a scam. Furthermore, all three countries denied issuing “free” asylum visas to Ethiopians.

Immigration, Refugees and Citizenship Canada (IRCC) — the country’s national immigration department — confirmed that the claim is fabricated and that the Telegram channel linked to the post is not associated with Canada nor the Canadian embassy in Ethiopia.

“It should be noted that Canada is not issuing free visas to Ethiopians seeking asylum in Canada on social media or through Telegram.”

The American and Australian embassies in Ethiopia also denied that their countries were issuing asylum visas to Ethiopians affected by the domestic 14-month conflict.

“There are no free immigration visas offered to Ethiopians,” Julia Niblett, a spokeswoman for the Australian embassy in Ethiopia told AFP Fact Check.

“Any individual applying for a visa to enter and stay in Australia is required to meet all legislative requirements for grant of the visa including, where applicable, the visa application charges,” she said.

“That is a false claim,” a spokesman told AFP Fact Check.

“At the US Embassy in Addis Ababa, routine processing of both immigrant and nonimmigrant visas currently remains suspended. The consular section is only processing emergency visa cases and is doing so on a very limited basis, at this time. Though we look forward to resuming normal consular operations, we cannot yet say when this will be,” the spokesman added.