A video shared on social media features an interview with an embalmer who claims he has seen an increasing number of bodies with unusual blood clots due to the Covid-19 vaccines. But experts say there is no data connecting the anecdotal observation to the shots, and the vials seen in the clip are not clearly identifiable.

"Strange blood clots found in MOST bodies is very disturbing. They were not sure whether it is being caused by COVID, the Vaccine or something else but now they think its caused by the vaccine," says a September 11, 2022 tweet.

The post includes a video of an interview with an American embalmer named Richard Hirschman who says clots are found in "50 to 70 percent of bodies." 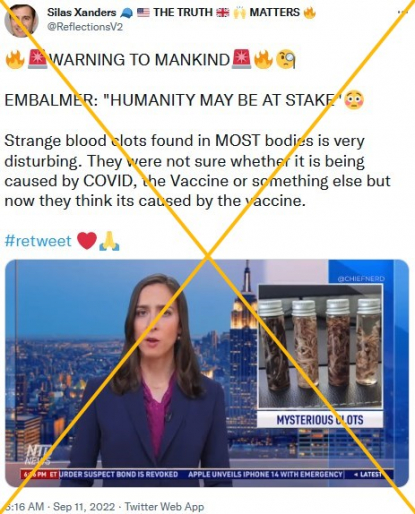 The video also references an article by The Epoch Times, a website that has previously published misinformation and was banned from advertising on Facebook following an NBC News investigation.

The article claims to show "the differences between the blood of the unvaccinated and the clot" Hirschman sent to a lab in the US state of Texas.

"I am not a doctor or scientist not even a phlebotomy expert," Hirschman, a licensed embalmer in Alabama, told AFP via Facebook Messenger. "But I am very familiar with embalming and I work with blood all the time."

Experts, however, said the presence of blood clots in dead bodies could have any number of causes, including obesity, smoking or infection with Covid-19.

"It is usually impossible to tell what caused the blood to clot in the first place by looking at the clot," said David Dorward, a consultant pathologist and a senior clinical lecturer at the University of Edinburgh, in a September 22 email. "For example, a blood clot from a patient who had clots caused by Covid infection when compared to blood clots formed following prolonged bed rest after a major operation would look pretty much identical."

Monica Torres of NXT Generation Mortuary Support in the US state of Arizona offered another explanation.

"The blood clots are from refrigeration. It happens to many bodies," she said in a September 19 email. "It's just that there were so many bodies to process, many of them sat in refrigeration for long durations so they got blood clots. It's not a big deal and these people are trying to make it a thing."

The French Association of Thanatopraxy (AFT) emphasized to AFP the difference between samples taken during an autopsy and the care provided by thanatopractors or embalmers. The former is performed by a physician and can be used to determine the cause of death, while the latter is aimed at preserving bodies from natural decomposition.

Embalmers are required to perform acts of conservation, such as the sterilization of arteries. But they do not "take samples," AFT said September 14.

"Everything that is originally in the bodies goes back into the bodies," the organization said, adding that embalmers only remove "pockets of natural liquids from the person" that are then cremated.

The AFT also said embalmers often do not know the causes of death.

"This is part of the medical file and this section is hidden for us, it is accessible only to forensic scientists for example," the group said.

Jessica Koth, director of public relations for the US National Funeral Directors Association (NFDA), said in a September 17 email that it would be unusual for an embalmer to know someone's vaccination status unless their family disclosed that information.

Marie-Antoinette Sevestre-Pietri, president of the French Society of Vascular Medicine, further questioned the tissue shown in the video.

"We cannot draw any conclusion from these images. It may be anything," she said.

Sevestre-Pietri said removing tissue of the size seen in the video would require opening the vessels widely -- a practice that would be unusual for embalming. A typical incision would be one centimeter, she said.

"You do not lacerate the bodies entrusted to you," Sevestre-Pietri said.

The European Medicines Agency (EMA) has listed blood clots as a "very rare" side effect of the AstraZeneca and Johnson & Johnson Covid-19 vaccines.

Health Canada also lists "blood clots with low platelets" among the "rare reactions that have been reported" following administration of the two viral vector shots. The US Centers for Disease Control and Prevention has reported four cases of "blood clots in large blood vessels and low platelets" per one million Johnson & Johnson doses administered.

But David Smadja, professor of hematology at the George Pompidou Hospital in Paris, said "there is currently no data showing a risk of thrombosis with messenger RNA vaccines" from companies such as Pfizer and Moderna -- the most widely administered Covid-19 shots in Canada and the US.

A study published in The Lancet in 2021 concluded that patients with a Covid-19 infection faced a significantly higher risk of developing blood clots than people who received mRNA vaccines.

AFP has fact-checked other inaccurate claims about vaccines here.