Social media users claim former US president Donald Trump posted on Truth Social that Queen Elizabeth II secretly knighted him before her death. This is false; the purported screenshot from Trump's platform is fake, his spokesperson confirmed, and research shows that no authentic live or archived versions of such a post exist.

"I never told anybody but she knighted me in private," says the text in what appears to be a screenshot of a Trump post on Truth Social, the social media platform he launched in February 2022.

The image circulated widely after Queen Elizabeth II died at the age of 96 on September 8. 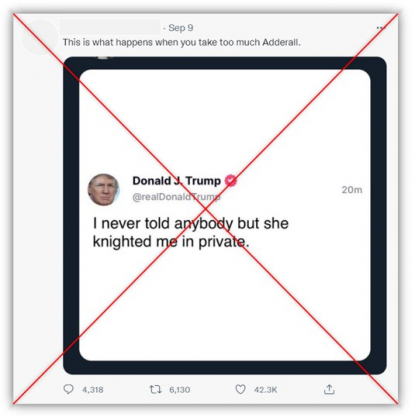 Posts sharing the claim received more than 10,000 interactions on Facebook and Instagram, according to CrowdTangle, a social media insights tool. "Sir Donald" trended on Twitter after similar posts shared the image and quote.

But the Truth Social post is fake; it does not appear in live or archived versions of Trump's Truth Social feed.

"This is not real," Trump spokesperson Liz Harrington said in an email to AFP.

The former president did publish a statement on Truth Social in which he expressed "sincere condolences" to the royal family. Trump also shared photos of himself and the queen.

But AFP found no evidence that Trump posted about an honorary knighthood, which the queen did confer to a handful of former US presidents, including George HW Bush and Ronald Reagan.

The fake Truth Social post is not the only piece of misinformation about Trump's relationship with the queen that circulated online after her death.

An image shared widely across Telegram and Facebook appears to show the late monarch wearing a blue sash that says, "Trump won," in what seems to be an attempt to give credence to the false claim that he beat Joe Biden in the 2020 presidential election.

"THE QUEEN KNOWS!!!" says a September 8 Telegram post, which accumulated more than 240,000 views.

But the image has been digitally altered. The original photo, taken during Trump's June 2019 visit to Buckingham Palace in London, shows the queen wearing a blue sash without accompanying text. 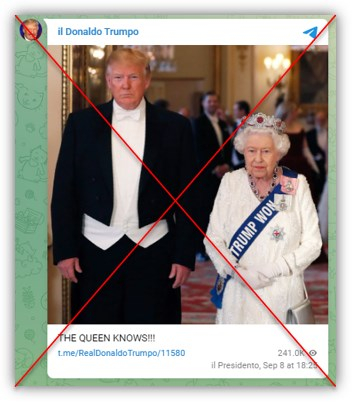 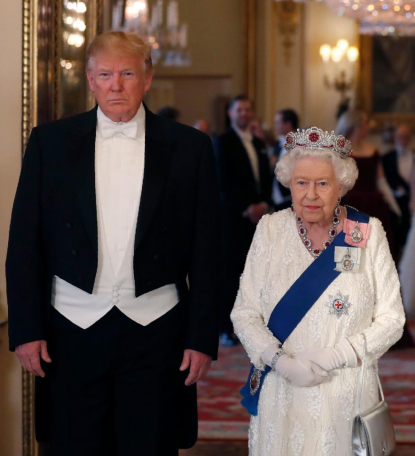 Britain's Queen Elizabeth II and former US president Donald Trump pose for a photograph ahead of a State Banquet in the ballroom at Buckingham Palace in London on June 3, 2019 ( POOL / Alastair Grant)

AFP has fact-checked other misinformation about the queen's death here.