A video has been viewed tens of thousands of times after it circulated alongside a claim that it shows a lifelike robot greeting and hugging passengers at an airport in Tokyo. However, the claim is false. The video actually shows a Japanese model who acted as a robot in a free-hug event in Tokyo in 2019. The footage was filmed outside Shimokitazawa Station in the Japanese capital, not at an airport.

"At Japan's Tokyo airport, an iconic, attractive robot is tasked with greeting and hugging passengers. Would she still be around if she were in Indonesia... or would she be missing?" reads the Indonesian-language caption of the post.

The one-minute footage shows a woman waving her hand and moving her head in a robotic manner, followed by scenes of her hugging people one by one. 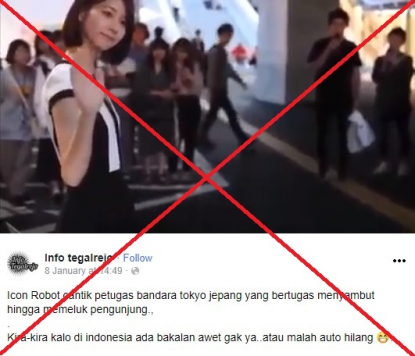 It also circulated with a similar claim in Thai and in Chinese.

The tweet includes a screenshot from a YouTube video depicting the same woman wearing the same costume.

The Japanese-language caption of the tweet reads: "It's not been a long time, but I've already got 10,000 subscribers. Thank you. And the video about free hugs has also garnered 310,000 views. Amazing!"

The video was originally uploaded to the user's YouTube channel before being removed. The archived version, which is available here, shows it was posted on October 12, 2019.

Below is a screenshot comparison of the video in one of the misleading posts (left) and the YouTube picture posted on Twitter (right), with corresponding features marked by AFP.

A further keyword search on Google found this article, published by Yutura, a Tokyo-based website that covers trending topics on YouTube, on October 27, 2019.

The Japanese-language article reads in part: "Android Girl ... is grabbing attention after posting a video on YouTube titled: '[Shimokitazawa] I tried to give free hugs as an android [Android Girl]'  on October 12, 2019.

"Is she really an android? In fact, she is a human. She is called Saori Takayama, a model who goes by the name 'Android Sister' and acts as a lifelike android."

Takayama is a Japanese model who rose to prominence in Japan and overseas for her performance as a lifelike android at the Tokyo Game Show 2017, according to her interview with her alma mater, Kyoto Sangyo University.

According to Takayama's Instagram bio, she is an "artist" who is freelancing as an android actor.

In a blog post which she published and tweeted on October 16, 2019, she wrote about "acting as an android" in a free-hug event in front of Shimokitazawa Station.

Takayama can be seen wearing the same black-and-white dress in several of her social media posts, such as here on YouTube and here on Instagram, as well as on the cover of her travel book.

Not at Tokyo airport

AFP found that the video was indeed filmed outside Shimokitazawa Station in Tokyo -- not at an airport in the Japanese capital, as claimed in some of the misleading posts.

Below are screenshot comparisons between the video in the misleading post (left) and the Google Street View imagery (right), with matching features circled by AFP: 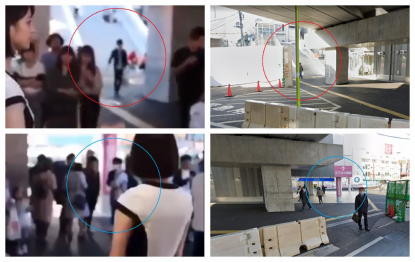 AFP previously debunked a similar claim that used another video of Takayama, which was taken at Tokyo Game Show 2017.