Photo shows US crash-landing, not plane downed by military in Ethiopia

As fresh fighting erupted between Ethiopian troops and Tigrayan rebels in late August after a five-month truce, new falsehoods about the war have spread online. A photo shared in multiple Facebook posts claims to show a plane carrying weapons recently downed by the Ethiopian airforce in Tigray. But this is false: the picture features a light aircraft that crash-landed in the Avra Valley region in the US state of Arizona in 2021.

One of the posts was published on Facebook on August 24, 2022, and has since been shared 70 times.

The post, written in Amharic, translates to: “The Ethiopian air force has shot down the plane ferrying weapons to the TPLF terrorists in Tigray. They blew it mid-air.” 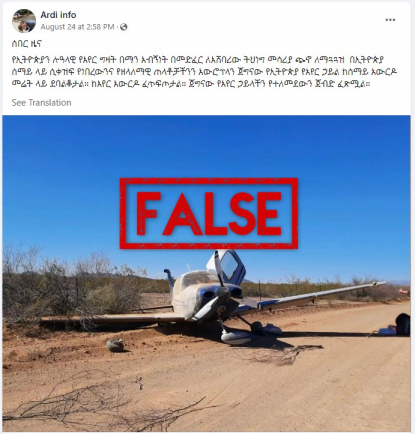 The image was also shared in another Facebook post making a similar claim on the same day.

The conflict in Ethiopia's northern Tigray region, which began in November 2020, has killed untold numbers of people, with reports of atrocities including sexual violence and mass killings.

The March truce had paused the worst of the bloodshed and allowed aid convoys to slowly return to Tigray, where the UN says millions are severely hungry, and fuel and medicine are in scarce supply.

But on August 24, reports of fresh offensives were followed by Ethiopia's air force announcing it had downed a plane carrying weapons for the Tigray People's Liberation Front (TPLF). AFP has been covering the fighting here.

However, the photo does not show a plane downed in Ethiopia in 2022.

AFP Fact Check conducted a reverse image search and found that the picture in the post shows a light aircraft that crash-landed in the US.

The photo was featured in an article by US news site KOLD News 13 published on March 29, 2021.

According to the report, the light-engine plane crashed in Avra Valley in the US state of Arizona. Its two occupants suffered no injuries. 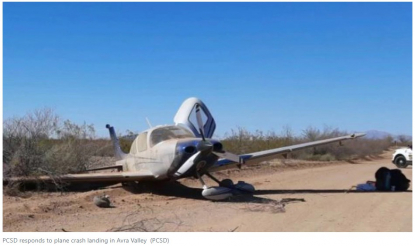 The news site reported that the Pima County Sheriff's Department (PCSD) responded to the crash.

The PCSD confirmed to AFP Fact Check that the photo shows “an aircraft that made a crash landing on Pump Station Road in the Avra Valley area near Tucson on March 28, 2021”.