Nigerian veteran politician Bola Tinubu is vying to succeed President Muhammadu Buhari in general elections scheduled for February 2023. A former governor of Lagos state, he was instrumental in getting Buhari elected in 2015 and 2019. A recent Facebook post claims to show a picture of a crowd at a pro-Tinubu rally in Sokoto state, in northwest Nigeria. But this is misleading: the picture was taken in 2019 when Buhari was chasing a second term as a candidate for the ruling All Progressives Congress (APC). 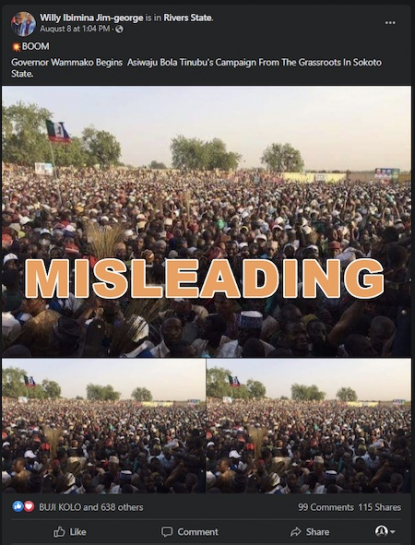 The post has been shared more than 100 times and includes three copies of the same image showing a large crowd of people.

Wamakko, misspelt as Wammako in the post, was the governor of Sokoto state between 2007 and 2015 as the candidate of the then ruling Peoples Democratic Party. He defected to the then opposition APC in 2013 before the end of his second term. and was elected senator two years later.

But the claim that Wamakko mobilised a crowd for Tinubu is misleading.

Olusegun explained it showed party members waiting for Buhari’s arrival at a rally held in Sokoto.

Buhari was APC’s presidential candidate in 2015 and 2019, winning both times. He and Tinubu were among those who led the coalition of political parties to form the APC in February 2013.

Wamakko joined them from the PDP several months after the party was formed.

Tinubu chaired the campaign team for Buhari’s re-election, with both men attending rallies in many states -- including Sokoto where the picture in the misleading claim was taken on January 23, 2019. It was published by local media, including online newspaper PM News. 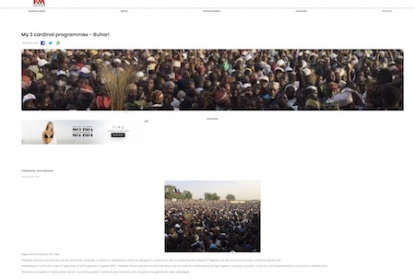 With Buhari stepping down next May after the completion of his second term, the ruling party nominated Tinubu in June as its candidate for the February 2023 presidential election. The public campaign for next year’s election officially begins on September 28, 2022.