A video has been viewed tens of thousands of times in multiple Chinese-language posts claiming it shows a Chinese person being violently assaulted in Cambodia, warning "ethnic Chinese friends" not to travel to Southeast Asia. The posts circulated online after Hong Kong officials said they had received fresh reports of Hong Kongers being lured to countries including Cambodia, Myanmar, Thailand and Laos by so-called "boiler room" scams. The video, however, has circulated in news reports since July about an incident in Brazil.

The 49-second video appears to show a woman with her hands tied being taken to an outdoor place and beaten by several people with sticks.

The post's traditional Chinese caption translates as: "A horrific incident of brutality against ethnic Chinese in Cambodia, a communist country.

"Tell ethnic Chinese friends to avoid going to countries with such a communist system, including Myanmar."

Simplified Chinese characters superimposed on the video read: "Still want to go to Cambodia for a job?" 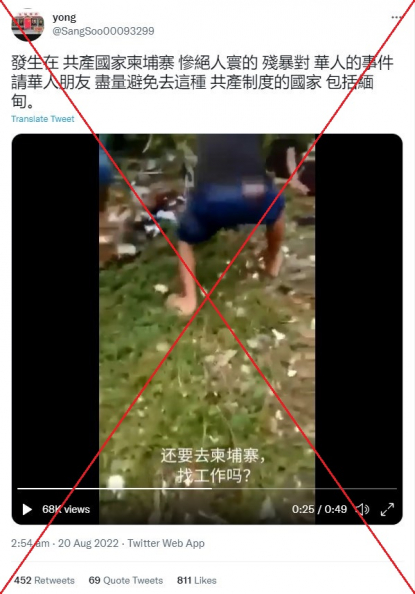 In recent months, victims have reported being lured to countries including Myanmar, Cambodia, Thailand and Laos on false promises of romance or high-paying jobs, and then held against their will and forced to work, sometimes for months.

The same video was also shared alongside a similar claim here, here and here on Twitter, and here on US social media site Gettr.

However, the video has circulated since July in news reports about an incident in Brazil.

In the clip, some of the men can be heard saying in Portuguese: "From the neck down bro" and "in the legs" as they beat the woman.

Portions of the same video were embedded in the report.

Below are two screenshot comparisons of the video shared in the online posts (left) and the video embedded in the G1 report (right): 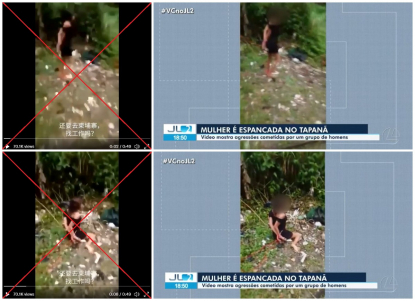 The news report is titled: "Video shows woman being beaten with clubs in Belém".

"A video posted on social media this Wednesday (20) recorded the beating of a woman in the Tapanã neighbourhood of Belém. Police investigations seek to know whether the crime is related to criminal factions," reads the report's first paragraph.

Belém is a city in northern Brazil, within the state of Pará.

According to the report, police detained three suspects in connection with the attack following an armed standoff, and rescued the female victim.

"According to the military police, a team went to the place that appears in the images. Upon arrival, the police were met with gunfire. In the confrontation, three suspects were hit and taken to a health unit.

"The Civil Police reported that the woman who appears in the video has already been heard and sent for forensic examinations."