Skip to main content
A woman cooks lunch in her house in Manila on February 5, 2019 ( AFP / NOEL CELIS)

As surging inflation pushed up living costs in the Philippines, Facebook posts and YouTube videos promoted a "power-saving device" that they claimed could slash electricity bills. However, the posts show news reports that have been doctored to make it look like tests found the device was effective, when they actually found it did not work. The energy department warned consumers against the "unscrupulous" offer.

"The DOE (Department of Energy) tested this energy-saving device and it has been proven effective," reads a Tagalog-language Facebook post shared on July 5.

The video, which racked up more than 80,000 views, appears to show a news report from TV Patrol, a show from Philippine broadcaster ABS-CBN.

The footage shows journalist Alvin Elchico speaking about a device called "Pro Electric Saver". He says: "Experts at the Department of Energy tested popular energy-saving devices. The result is…"

The clip abruptly cuts to journalist Bernadette Sembrano, who appears to say: "[They're] effective. That is what the Department of Energy discovered when they tested these energy-saving devices.

"It turns out, using these gadgets really helps consumers save on electricity."

The chyron at the bottom of the screen reads: "DOE: Power Saver Devices are effective." 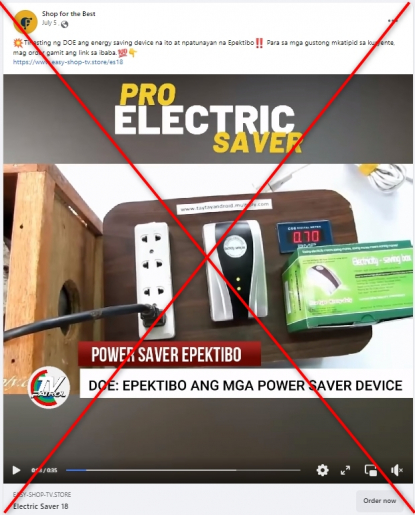 Inflation spiked to a near-four-year high of 6.4 percent in June in the Philippines, as surging food and fuel prices partly sparked by the Russian invasion of Ukraine pushed up living costs.

Some social media users appeared to believe the device could help them save on electricity bills.

"How can I order and how much?" read one comment.

"Should I put the device on each socket where I have an appliance?" another wrote.

However, the posts show edited footage from news reports which actually said that tests found the device was ineffective.

ABS-CBN hit back at the posts in a fact-check published on August 12, which said the video spliced two news reports, one from 2015 and one from 2019, which actually said that government tests found the devices did not help save electricity.

The first 22 seconds of the altered video correspond to the start of the 2015 news report.

But in the full report, journalist Alvin Elchico goes on to say that "consumers won't have lower electric bills with this device", citing tests by the energy department.

The altered video (below left) has been changed to insert a picture of the purported energy-saving device, along with text reading "Pro Electric Saver" and "Power Saver Effective". However, the same frame in the original report (below right) showed the device alongside text that read "Warning about power savers".

Screenshot comparison showing the doctored elements in the video in the false post (left) with its corresponding frame in the original report (right):

Furthermore, the original report's audio was doctored to remove the Tagalog word for "not" ("hindi") by journalist Bernadette Sembrano.

She actually said: "It turns out, using these gadgets does not really help save on electricity."

The chyron which originally read "Not effective" was also altered to say "Effective".

Screenshot comparison showing the doctored elements in the video in the false post (left) with its corresponding frame in the original report (right):

The Department of Energy warned consumers not to fall for the video in a statement on July 27.

"The video was intentionally spliced and edited to deceive our energy consumers," it said.

"As of today, the DOE has yet to find an energy-saving device that can satisfy its claim for efficiency."

"The DOE always advise consumers to be vigilant and report these unscrupulous practices."