"Arrests of telecom fraudsters in Cambodia and Myanmar," reads a simplified Chinese tweet posted on August 22.

"The big boss caught wind and fled a long time ago. They just arrested the pawns. After Chinese police left, the boss came back and continued to commit fraud."

The tweet shows a video of police storming a building and detaining a group of people. 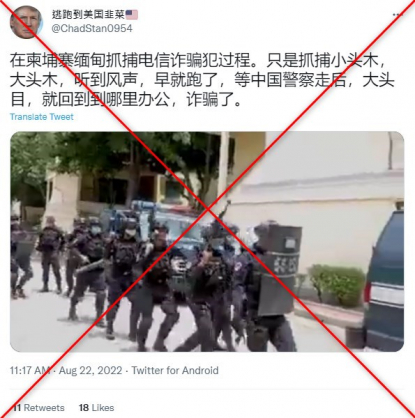 Screenshot of a tweet sharing the false claim, taken on August 24, 2022

The posts circulated as victims of job scams reported travelling to countries such as Myanmar, Cambodia, Thailand and Laos on false promises of romance or high-paying jobs, and then being detained and forced to work.

In one case, dozens of Vietnamese casino workers who were allegedly forced to toil without pay in Cambodia fought off security guards to escape and fled back to their homeland by swimming across a river.

However, the video circulating online does not show recent arrests in connection with job scams.

The video was published in a Facebook post on August 14, 2020 by the Phnom Penh Gendarmerie, which said it showed officers in the Cambodian capital detaining 29 Chinese nationals on suspicion of kidnap.

The Khmer-language post reads: "On the afternoon of August 14, 2020, the Phnom Penh Gendarmerie sent 29 Chinese suspects to court in accordance with the law for their involvement in the kidnapping of fellow Chinese nationals, which was uncovered on August 12, 2020 at a hotel named Kandal Suon Chhbar in Chaktomuk district".

Three victims were rescued in the operation, it added.

The video matches the footage circulating in a false context in August 2022, as shown by screenshot comparisons below. 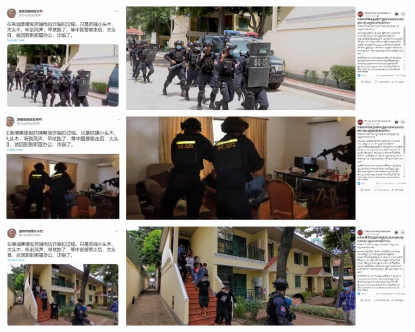 The Phnom Penh Post also reported on the arrests in an article that features a photo showing the suspects in the video.

Below are suspects seen in the video (left) and in the Phnom Penh Post's article (right).

The Phnom Penh Post reported that the suspects were repatriated to China.