A day after Kenya’s presidential election results were announced, a video was shared on Facebook and TikTok alongside a claim that it shows Azimio la Umoja coalition leader Raila Odinga conceding defeat to president-elect William Ruto. But the claim is false: Odinga has rejected the outcome of the latest elections and his coalition has launched a legal challenge. The video has been edited and actually shows Odinga’s concession speech after the Supreme Court affirmed Uhuru Kenyatta as president back in 2013.

The video was published on Facebook on August 16, 2022, and has been shared more than 60 times. 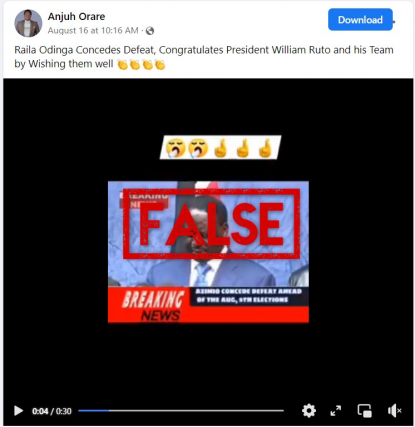 In the 30-second long clip, Odinga can be heard saying: “Ladies and gentlemen, it is my hope that the incoming government will have fidelity to our constitution, and implement it to the letter for the betterment of our people. And in this regard, I wish the president-elect ... honourable William Ruto ... and his team well.”

At the 19-second mark, there is a noticeable difference in the audio levels when Odinga mentions Ruto.

The same video was shared on TikTok with a caption claiming that “Raila has conceded defeat”.

However, this is false.

It shows Odinga giving a concession speech in March 2013 after Kenya’s Supreme Court ruled in favour of Uhuru Kenyatta, upholding the poll results which Odinga had sought to challenge.

In his speech following the court decision, Odinga congratulated Kenyatta.

“It is my hope that the incoming government will have fidelity to our constitution, and implement it to the letter for the betterment of our people. And in this regard, I wish the president-elect honourable Uhuru Kenyatta and his team well,” said Odinga.

But in the manipulated video, Kenyatta’s name has been edited out and replaced with Ruto’s.

Odinga, who lost his fifth bid for the presidency, rejected the results on August 16, 2022.

He cited a split in the Independent Electoral and Boundaries Commission (IEBC) over the outcome.

IEBC chairman Wafula Chebukati declared Ruto the winner on August 15, 2022, with 50.49 percent of the vote to Odinga’s 48.85 percent. Four of his commissioners dissented.

Odinga filed a legal case challenging the results at the country’s Supreme Court a week later.

No presidential election has gone uncontested in the country since 2002.