Skip to main content
A photo taken on July 28, 2022 shows the partially dried-up river bank of the Danube river, which is at a low water level, at Szentendre, Hungary. According to Hungarian authorities, the last seven months were the driest ever registered in Hungary since 1901. ( AFP / FERENC ISZA)

A TikTok video has been viewed tens of thousands of times that claims climate change is a global conspiracy concealing the fact there is an unlimited amount of water within the Earth. The clip -- which cited a geophysicist at a US university as the source of the claims -- was reshared in multiple posts on Facebook and Twitter. But AFP found the US university had no record of the purported geophysicist, and experts told AFP the video's claims were false.

The nearly three-minute clip shows a man saying "primary water" is one of the "most kept secrets on Earth".

"If the world knew about primary water, the control system -- their power -- would dissipate," he says. "There is a potential that there is more freshwater -- called primary water -- in the Earth's crust than there in the world's oceans.

"Why do we constantly hear about droughts and catastrophic environmental climate change and not enough rain and places are going without water?"

He then goes on to allege there is a global conspiracy to conceal the supply of "primary water" from the world by modifying the weather to create droughts.

Pointing to this stock photo of airplane tracks in the sky, he says: "If you see these trails in your sky, know for a fact your weather is being modified", adding that climate change is an "artificial idea". 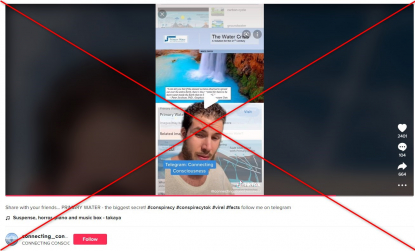 The video resurfaced online in July this year on Facebook and Twitter and was viewed more than 57,000 times in posts from Australia, the US, Canada and the UK.

A spokesperson for Northwestern University told AFP that there was no such person in its geophysics department or any of its Earth sciences departments.

"There is not anyone by that name -- staff member, researcher, or otherwise," the spokesperson said.

The other central claims in the video are also false, experts say.

Claims aiming to downplay global warming or the role of humans in climate change regularly circulate on social media, as debunked by AFP here.

In 2021 and 2022, the IPCC published its major sixth assessment report, warning of the need for urgent measures to cut greenhouse gas emissions and avoid catastrophic global warming.

Authored by more than 200 scientists from 66 countries, the report reflects the global consensus among scientists on human-caused climate change.

"It is unequivocal that human influence has warmed the atmosphere, ocean and land," the report said.

In the video, the man claims that drilling into the Earth to at least 800 feet would yield an "unlimited amount of pure fresh water, mineralised, super rejuvenating for the body, amazing for irrigation for farms etc."

But Grant Ferguson, a professor of geological and environmental engineering at the University of Saskatchewan, told AFP: "There is no primary water vein at a depth of 800 feet."

Hongzhan Fei, a researcher of mineral physics at the University of Bayreuth Bayerisches Geoinstitut, said that humans cannot access water that is deep below the Earth's surface.

"Such water cannot be used by humans -- that's too deep", he said. "[Well drilling] can only reach around ten kilometers deep."

Later in the video, the man baselessly claims the United Nations bombed Libya's Great Man-Made River project as it "tapped into the primary water cycle".

The Great Man-Made River was one of the major projects spearheaded by slain dictator Moamer Kadhafi during his four decades in power.

It brings water from underground aquifers deep in the Sahara desert in the south of Libya to settlements on the Mediterranean coast in the north.

Contrary to the video's claim, reports published around the time the video first circulated indicate the water network was closed due to violence between rival camps in Libya.

AFP reported on August 26, 2021: "The water network was closed after loyalists of Abdullah al-Senussi, the jailed brother-in-law of slain dictator Moamer Kadhafi, threatened to sabotage it unless he was released."

The video claims "geoengineering chemtrails" are used to modify the weather, but experts have said there is no evidence to support this claim.

AFP has previously debunked a chemtrail conspiracy theory that claims white trails left by aircraft can cause Covid-19 infections.