The photo -- showing a boat with an Indonesian flag that appears about to capsize -- appeared in this Facebook post, dated February 5, 2022.

"Verily we belong to Allah and verily to Him do we return. Boat sinks, killing 139 passengers who are not yet identified !??" reads the Indonesian-language caption of the post. 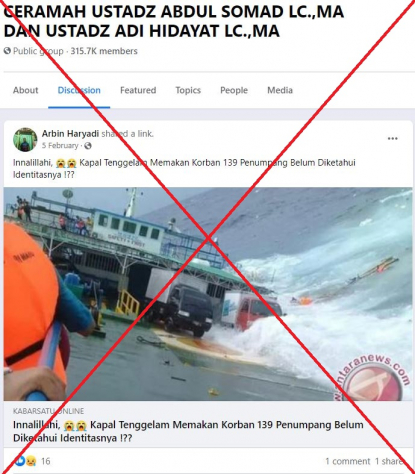 The post, which was uploaded in a Facebook group with more than 315,000 members, also shared a link of a blog article, dated February 3, 2022.

The blog article's headline made the same claim. 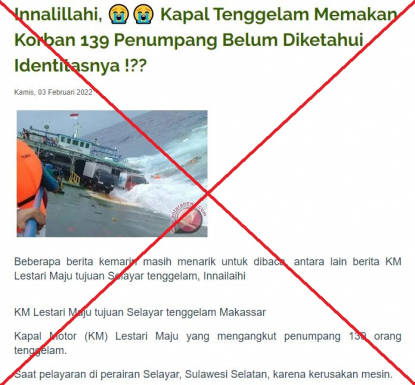 Screenshot of the misleading blog post, taken on August 16, 2022

The first paragraph of the blog article reads: "There are several interesting news reports from yesterday, including the news about the sinking of the Selayar-bound KM Lestari Maju," followed by the Islamic expression of condolences.

The same photo also circulated with a similar claim in February 2022 on Facebook here and here, and in other blog posts here, here, and in August 2022 here.

The photo contains the logo of the Indonesian state-run news agency Antara.

A keyword search on the website of Antara found the photo was published in a news report about a ferry that sank in Indonesia's South Sulawesi on July 3, 2018.

Below is a screenshot of the Antara report: 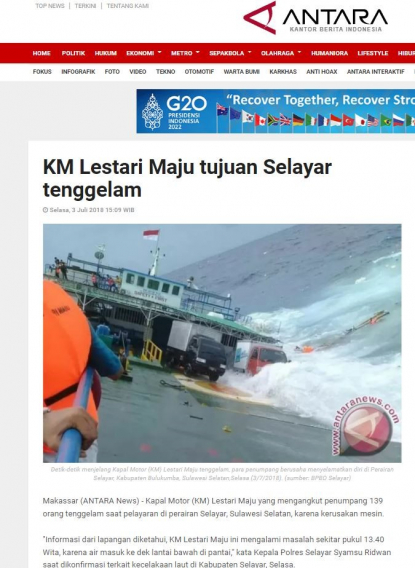 Screenshot of the Antara report

The photo, credited to the Selayar Disaster Mitigation Agency, has an Indonesian-language caption that reads: "Moments before KM Lestari Maju sank, passengers were trying to save themselves in the waters of Selayar, Bulukumba regency, South Sulawesi, on Tuesday, July 3, 2018."

The first paragraph of the Antara report reads: "Ferry KM Lestari Maju, which carried 139 passengers, sank in the waters of Selayar, South Sulawesi, because of a machine problem."

The same photo was published by other Indonesian media outlets, including The Jakarta Post and Detikcom, on the same day in their reports about the ferry disaster.

A report released in October 2018 by the Indonesian Transportation Ministry, as part of the government's investigation into the accident, says that of 190 passengers onboard, 155 survived and 35 died.

AFP found no credible reports about a boat accident in Indonesia in February nor August 2022 in which 139 people were killed.

AFP previously debunked posts that misused a different photo from the same disaster.