Photo does not show boat accident that 'killed 139' in Indonesia

Blog articles shared in Indonesia in June 2022 publish a photo they claim shows a boat accident in which 139 passengers were killed on a "tragic Sunday". The photo has been shared in a misleading context; it has circulated in news reports about a ferry disaster in 2018 in the Southeast Asian archipelago nation that killed at least 36 people.

"Verily we belong to Allah and verily to Him do we return, a tragic Sunday," reads an Indonesian-language Facebook post from June 20, 2022.

"A boat accident happened again, killing 139 unidentified passengers. Please pray for them, hope they are at peace, Amen."

The post, shared in a Facebook group with more than 255,000 members, shows a photo of a keeling boat. 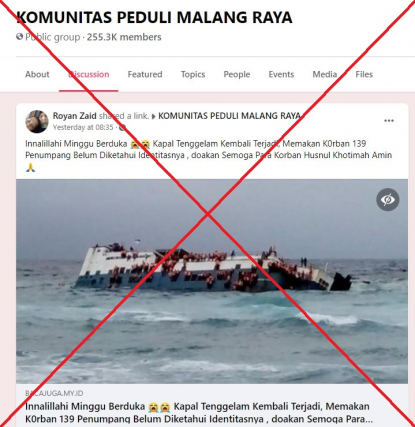 Screenshot of the misleading blog article, taken on June 21, 2022

Multiple Facebook posts shared the same claim in June 2022, posting it in groups with more than 1.2 million members combined, including here, here, here and here.

The posts link to other blogs, including here, here, here and here, that share the same photo alongside similar reports about a purported boat accident killing 139 people.

A reverse image search on Google found the photo in news reports about a boat accident in Indonesia in 2018.

Various news media, including CNBC Indonesia, Okezone, Merdeka and Bisnis Indonesia, published the photo in reports about a ferry called KM Lestari Maju that ran aground near Indonesia’s Selayar Island on July 3, 2018.

The photo credit is listed as "unknown".

At least 36 people died and more than 167 were rescued from the boat, Indonesian news outlet Tempo reported.

Below is a screenshot comparison of the image in the misleading post (left) and the photo in the CNBC Indonesia report (right):

AFP found no credible reports about a boat accident in Indonesia in June 2022 in which 139 people were killed.

The figure of 139 passengers was likely taken from KM Lestari Maju's manifest published by Indonesia’s transportation ministry, as reported by BBC News.