Posts on social media are sharing step-by-step guidelines purportedly issued by Kenya’s electoral body that claim voters should put an X mark next to the candidate they do not want. However, this is false; official voting regulations are clear that voters should only put a mark in the box next to their preferred candidate, and leave other boxes on the ballot blank. They are not asked to mark candidates that they do not want.

On August 6, 2022, a Facebook post published purported voting guidelines claiming to be from the country’s electoral body, the Independent Electoral and Boundaries Commission (IEBC). 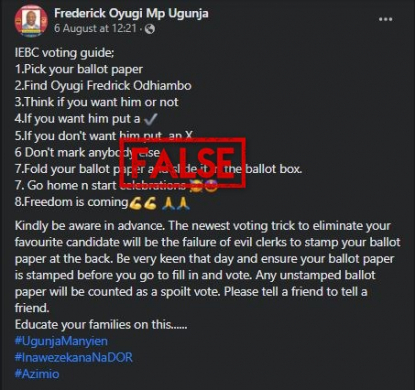 The purported guide consists of eight steps and claims that voters should first find a specific candidate’s name on the ballot — in this case, a parliamentary candidate.

“Think if you want him or not,” the post continues. “If you want him put a ✔️. If you don’t want him, put an X. Don’t mark anybody else.” 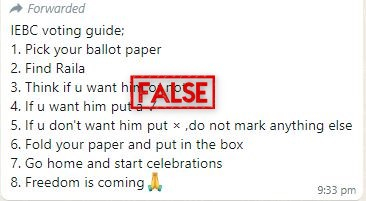 Screenshot of a WhatsApp message with false voting guidelines, taken on August 8, 2022

However, the purported guidelines are false.

How to mark ballot papers

Careful: Marking X for the candidate you do not want would actually mean voting for them.

According to the Independent Electoral and Boundaries Commission’s (IEBC) voting guidelines, voters should only mark their ballot next to their preferred candidates. The mark can either be a tick, a cross (X mark), a fingermark, or a dot.

Two marks on the ballot paper translate to a spoilt vote.

“You should put a mark next to your preferred candidate only and leave the rest blank,” said Njeru.

She emphasised that the mark should not identify the voter, "as there is secrecy of the ballot".