This video was filmed days before deadly road crash in Bangladesh


After a train smashed into a microbus in Bangladesh, a video of young men singing to music inside a vehicle circulated in Facebook posts that claimed it showed the final moments of passengers before the crash. However, the video was posted on TikTok two days before the collision in Chittagong in July 2022. One of the men in the video told AFP the clip had "no connection" to the incident.

"Video recovered shortly before the train accident in Chittagong! How close death is," reads a Bengali-language Facebook post from July 31.

"In an instant, tragic train-microbus accident in Mirsarai, 11 young lives were taken away, and their families cried and thousands of dreams were broken.

"I pray for the souls of those killed in the accident. I pray that Allah will make them dwellers in Jannah (paradise), Ameen." 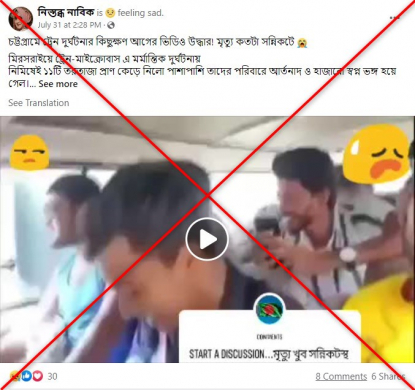 Eleven people were killed when a train collided with a microbus at a rail crossing on July 29 in Mirsarai in Chittagong on Bangladesh's southeastern coast, Bangladeshi newspaper The Business Standard reported.

The people who died were teachers and students returning from a picnic on the microbus, The Business Standard said.

The video was also viewed more than 2,000 times alongside a similar claim here, here and here on Facebook.

However, the footage was filmed before the deadly crash.

Keyword searches on Google found the video posted on TikTok by a user named Sazzad on July 27, two days before the crash.

Below is a screenshot comparison of the video in the false posts (left) and the video shared on TikTok (right):

Responding to the false posts, Sazzad posted a series of clips denying the claim that he and the young men in the footage were involved in the crash.

Further keyword searches also found one of the young men in the video had similarly denied the claim in the false posts.

AH Abir posted a video on Facebook on July 31 in which he said: "I am doing this Facebook Live to talk about a video of me. My younger brother posted this from his TikTok account with the heading, 'Bachelor boys' tour'.

"But one man commented there that this video shows the 11 students killed in the Mirsarai accident and soon it went viral. The claim is not true.

"Right now, I am wearing the same t-shirt I wore on our trip day. Our friends and relatives are worried about us seeing the misleading video. So I am telling you that this claim is baseless."

He said that Sazzad was his younger brother.

Contacted by AFP, Abir said: "We have no connection with the accident where 11 people have been killed. We didn't face any road accident."

"We, 16 in total, went to Banshkhali Eco Park in Chittagong for a picnic on July 24, 2022. On our way, I shot a video clip while we were singing and my younger brother posted this from his TikTok account."