A photo of a child with an orange backpack has circulated for years in Facebook posts in Thailand that claim it shows a deaf child donning the bag as part of a road safety initiative in the kingdom. However, the photo shows a campaign in China to raise awareness of deaf children among drivers. Thailand has not introduced such a measure as of August 4, 2022, although it does have a similar campaign offering black school bags with fluorescent tabs to deaf children.

"Information for drivers: if you see a kid with an orange backpack, please slow down because that is an indicator that they are deaf," reads a Thai-language post shared on June 6, 2019 on a Facebook page with more than 20,000 followers.

"With love from a highway police officer. Please share this with your loved ones."

The photo shows a child with a bright orange backpack. 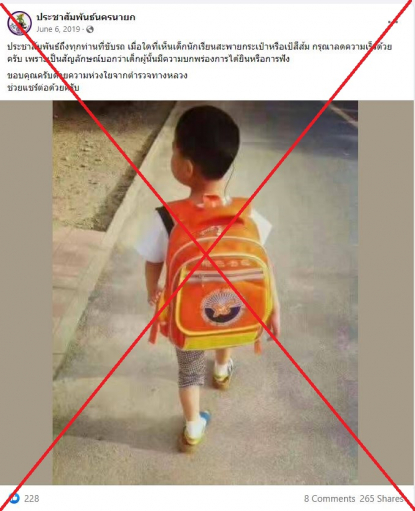 The photo has circulated in similar Facebook posts since at least 2018, including here and here, and resurfaced on the platform in 2020 and 2022.

A reverse image search and keyword searches on Google found the photo in an article on the website of the Audiology Development Foundation of China about the "orange backpack" campaign.

"The campaign, which started in Beijing in 2016, aims to donate orange backpacks with distinctive logos to hearing-impaired students of school age," the article reads in Chinese.

It says the bags aim to "raise awareness" of deaf children and "enable those with hearing disabilities to safely cross the street on foot".

Below is a screenshot comparison between the photo seen in misleading posts (left) and the Audiology Development Foundation of China's photo (right): 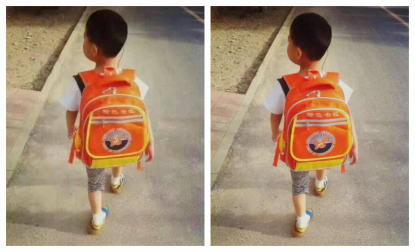 Screenshot comparison between the photo in misleading posts (left) and the photo on the Audiology Development Foundation of China website (right).

A close-up photo of the bag on the website shows that it features English-language text reading 'Audiology Development Foundation of China' alongside Chinese text reading 'orange backpack'.

The campaign has been widely reported by Chinese state-run media, including China Daily, CGTN and People's Daily.

Not introduced in Thailand

A representative for a deaf charity in Thailand said there was no "orange backpack" campaign for deaf children in the kingdom.

"I confirm the orange backpack campaign hasn't been implemented in Thailand," Saijai Sangkapan, deputy secretary-general of Thailand's Foundation for the Deaf under the Royal Patronage of Her Majesty the Queen -- the country's only non-profit organisation which aims to support people with hearing impairment -- told AFP on August 4, 2022.

"However, we have a similar campaign in which deaf children receive black school bags with fluorescent tabs," she said.

"The campaign aims to promote equality for deaf individuals by allowing others to recognise deaf children in public spaces."

Thai news agency MCOT showed photos of the black backpack from the campaign in a debunk published on January 9, 2021