Graphic footage of a man killing a deer has been viewed thousands of times in social media posts that claim it shows a politician named Anil Upadhyay who is purportedly a member of India's ruling party. But the video has previously circulated in posts that identify the man as a Bangladesh-born Australian -- not an Indian politician. A spokesman for India's Bharatiya Janata Party told the AFP he was "not aware" of any Anil Upadhyay holding office for the party.

"BJP MLA Anil Upadhyay. He is currently under the ruling government (party). Now no one will say their sentiments are getting hurt. Behaviour, character and face," reads the Hindi-language caption to the video shared on Twitter here on July 26, 2022.

The video shows a man aiming a rifle at a herd of deer before he fires a shot at one and then slits its throat.

It was viewed over 14,000 times before it was deleted.

The post appears to criticise the ruling Hindu nationalist BJP which previously banned animal slaughter in the Muslim majority region of Indian Kashmir during the Islamic festival of Eid al-Adha. 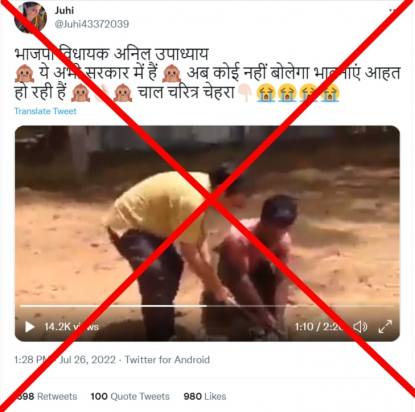 A screenshot of the misleading tweet, captured on August 1, 2022

The video was viewed over 3,000 times alongside a similar claim on Twitter here and here; and on Facebook here and here.

Multiple articles -- including fact-check reports from local media outlets BoomLive, AltNews and The Times of India -- indicate the man in the video is not an Indian politician.

A reverse image search on TinEye using keyframes extracted from the video found the footage was earlier posted on YouTube on January 31, 2020.

The caption to the YouTube footage states it was filmed in Bangladesh.

Below is a screenshot comparison of the video in one of the false posts (left) and the YouTube post (right):

Futher reverse and keyword searches found a still from the video was also embedded in an article published on July 12, 2015 by the Bangladeshi newspaper The Daily Star.

The article says the man's name was Moin Uddin and the shooting took place on July 4, 2015 at a farm in Chittagong, Bangladesh.

The video of the incident sparked outrage on social media, it adds.

The article states in part: "In the video uploaded on Facebook on July 4, Moin Uddin is seen first shooting the deer and then slitting its throat with a knife, an act described as a criminal offence by the wildlife conservation authorities."

Uddin -- who described himself as a Bangladesh-born Australian -- said The Daily Star "published inaccurate information" about his hunting licence at the time of the attack.

However, he also apologised for the incident.

"On 26th June 2015, during my last visit to Bangladesh, I killed an adult deer for consumption of meat and unfortunately I had posted a video clip on my Facebook page on the 4th of July 2015," reads his post in part.

"I would like to sincerely apologize to the people who were shocked or upset viewing the video. I promise I will never do such kind of activity again," he added.

The BBC's Bengali-language service, BBC Bangla, also reported on the shooting and the social media outrage on July 12, 2015.

Responding to the posts, BJP Delhi state media head Neelkanth Bakshi told AFP on August 5: "I am not aware about any such person holding office in our party, especially in Delhi."