Photo shows aftermath of a kidnapping in 2021, not the burning of an army vehicle

Attacks on Nigerian security officials in southeast Nigeria have escalated in recent months as authorities battle to quell a regional separatist group called the Indigenous People of Biafra. On Facebook, a photo is circulating with claims that it shows a military patrol vehicle set on fire after “unknown gunmen” attacked two soldiers inside. However, AFP Fact Check found that the photo was actually taken in 2021 following a kidnapping incident, and does not show an attack on soldiers.

The post has been shared more than 230 times and includes an image of a burning Toyota Hilux pickup truck. 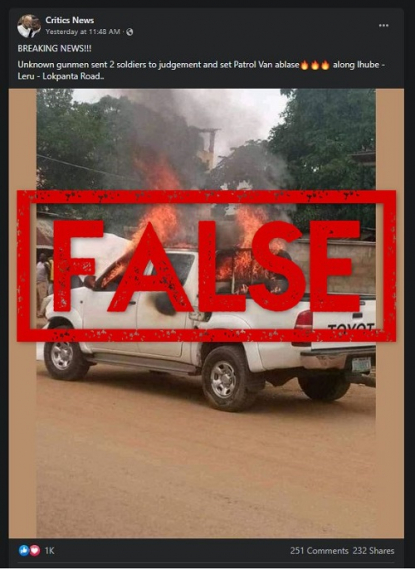 Nigerian media reported that gunmen had abducted several travellers and set ablaze an army van on July 30, 2022, between the Leru junction and Ihube section of the Enugu-Port Harcourt expressway in southeast Nigeria.

However, the photo in the claim does not depict this incident.

Photo from a kidnapping incident

AFP Fact Check conducted a reverse image search and found the image was published by a local news blog on June 6, 2021, along with a video showing the same vehicle burning.

The video was also published the same day on Facebook by the government-owned Anambra Broadcasting Service (ABS).

ABS said in its Facebook post that the sole occupant of the vehicle, a civilian, was kidnapped before the truck was set ablaze by “masked gunmen” in front of Cathedral Church of St Mary’s in Nnewi, a town in Anambra state in southeast Nigeria.

This account contradicts the claim that the incident depicted in the photo happened on “Leru - Lokpanta Road”, which does not pass through Nnewi or even the state itself.

The burning truck also has a private number plate, different from those on Nigerian Army vehicles which have black letters against a white background. 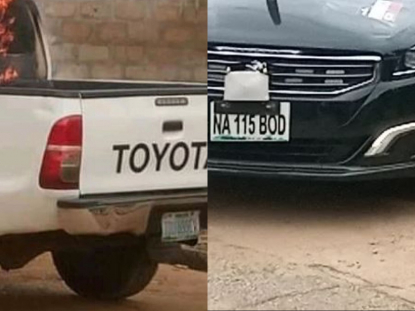 Screenshots showing the number plate of the burning vehicle (L) and that of the Nigerian Army, taken August 3, 2022

The Facebook account that published the photo has a history of posting false claims, one of them previously debunked by AFP Fact Check.