Skip to main content
A false claim about China intercepting a shipment of human parts from Nigeria is recirculating anew on social media after a politician was arrested in the UK over allegations of organ harvesting. File photo showing a container ship in Lagos ( AFP / PIUS UTOMI EKPEI)

Footage of a Nigerian lawmaker claiming that thousands of human penises shipped from Nigeria in a refrigerated container were intercepted in China has been circulating in social media posts after the arraignment of a senator in the UK over allegations of organ harvesting. However, the claim is false: the footage was filmed in 2021 when lawmakers voted to investigate the purported incident, which turned out to be a satirical story without any truth to it.

The fabricated story about a human penis shipment originated on a satirical website called the World News Daily Report (WNDR). It was first published on March 19, 2021, according to data provided by social media monitoring tool CrowdTangle. 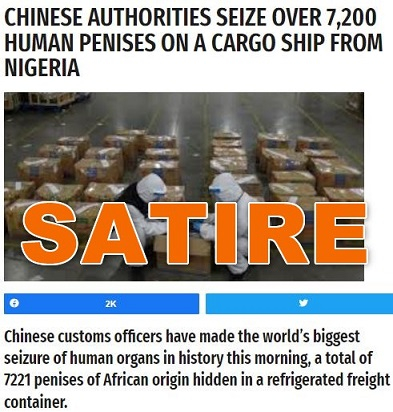 Screenshot of the article, taken on August 2, 2022

AFP Fact Check debunked the claim at the time, revealing it was a hoax.

However, it has resurfaced on social media, but this time with footage of House of Representatives member Rimamnde Kwewum apparently calling for an investigation into the reports. 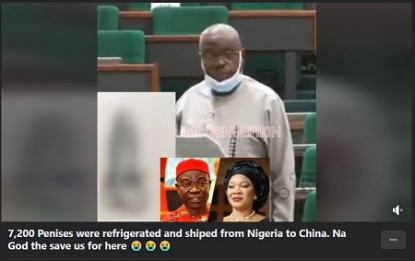 Screenshot of the video on Facebook, taken on August 2, 2022

“The House knows that about two weeks ago, acting on information provided by an anonymous source, Chinese authorities seized a ship that sails from Nigeria with 7,200 refrigerated penises, which were found in 36 boxes labeled as plantain on a ship that harboured at the Shanghai port,” Kwewum says in the video.

AFP Fact Check traced the origin of the latest claim to the Facebook page of a Nigerian comedian called “MC BenuePikin Comedy”.

“7,200 Penises were refrigerated and shiped (sic) from Nigeria to China,” reads the comedian’s caption on the video featuring the lawmaker, published on June 23, 2022. It has racked up more than 577,000 views on Facebook.

The clip, at just over four minutes long, features the comedian’s watermark, an illustration of an erect penis and a picture of Nigerian ex-deputy senate president Ike Ekweremadu together with his wife.

The video was also tweeted alongside the same claim.

The “MC BenuePikin Comedy” page published the claim with the footage on the same day Ekweremadu was arrested with his wife in the United Kingdom.

The London Metropolitan Police arraigned the couple in court on June 23, 2022, for allegedly conspiring to arrange the travel of a child into the UK in order to harvest organs, according to a statement on its website.

But there is no new evidence that 7,200 organs were harvested in Nigeria and confiscated in China.

AFP Fact Check traced the original footage of Kwewum calling for an investigation to the YouTube channel of Nigeria’s House of Representatives. The video, uploaded there on April 22, 2021, contained coverage of the plenary in the house that day.

Kwewum’s remarks begin 1:38:57 into the video on YouTube and were made a few days after AFP Fact Check had already debunked the entire story as having originated from a satirical website.