Skip to main content
A picture shows the Halfaya oil field belonging to the PetroChina company in the al-Kahla district in the city of Amara south of Baghdad on July 26, 2022. ( AFP / AHMAD AL-RUBAYE)

Posts falsely claim oil 'can regenerate faster than it is depleted'

It reads in part: "IN 1892 AT THE GENEVA CONVENTION J.D. ROCKEFELLER PAID SCIENTISTS TO CALL OIL FOSSIL FUEL TO INDUCE THE IDEA OF SCARCITY.

"THE TRUTH IS OIL IS THE 2ND MOST PREVALENT LIQUID ON EARTH NEXT TO WATER AND REGENERATES WITHIN THE EARTH FASTER THAN IT COULD EVER BE DEPLETED." 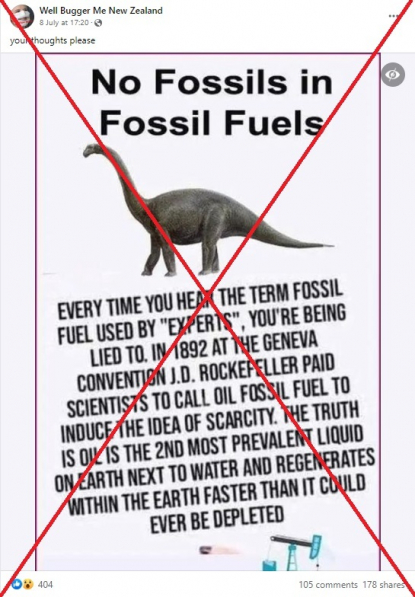 The same claim was also shared on Facebook here, here and here.

AFP has previously debunked the claim that Rockefeller coined the term "fossil fuels" in order to "induce the idea of scarcity" -- the phrase was coined by German chemist Caspar Neumann.

Fossil fuels are naturally formed in the earth's crust from decomposing plants and animals -- a process that usually takes millions of years -- which is why it is known as a non-renewable resource. Common fossil fuels include petroleum oil, natural gas and coal.

Chris Elders, a professor at Perth-based Curtin University's School of Earth and Planetary Sciences said the rate humans were currently extracting oil was much faster than the formation process.

"If we were to start off from scratch today and were to regenerate all the oil and gas that we have used, it would take several million years to achieve that outcome," he added.

David Shallcross, a chemical engineering professor at the University of Melbourne, also said that oil reservoirs can only supply a limited quantity of oil and gas due to the formation process beneath the Earth's surface.

"Oil and gas are a limited resource and once used will not be replaced for another few hundred millions of years," Shallcross told AFP via email.

While certain reservoirs can be refilled after oil has been extracted, it is only possible to do so with oil that already exists below the surface of the earth, according to Seppo Korpela, emeritus professor at the Ohio State University’s college of engineering.

"There are a couple of notable reservoirs arranged such that oil can refill the upper reservoir that has been exploited and thus depleted, from a lower one that was not found earlier," said Korpela.

"However, if that does not occur, the reservoir may either become depleted or not economically viable to tap."

Elders also said: "Over time, most oil fields become depleted -- i.e. the pressure in the oil field drops, and the amount of oil that is produced declines.

"The field [reservoir] is abandoned. [It is] Very clear evidence that the oil is not being regenerated as quickly as it is produced."