Skip to main content
An off-shore oil rig, off the coast of Port-Gentil, Gabon at sunrise (Justin Tallis/AFP)

Multiple Facebook posts shared hundreds of times claim that a late US oil magnate, John D Rockefeller, coined the term “fossil fuels” in order to “induce the idea of scarcity, allowing for the increase on the price of oil.” The posts go on to claim that hydrocarbons do not come from “from fossils, nor from the transformed remains of long dead organisms”. The claims are false; experts credit 18th century German scientist Caspar Neumann for coining the term “fossil fuel” and say they do in fact originate from ancient dead organisms.

The claims were published by a New Zealand-based Facebook user here. The post has been shared more than 170 times. 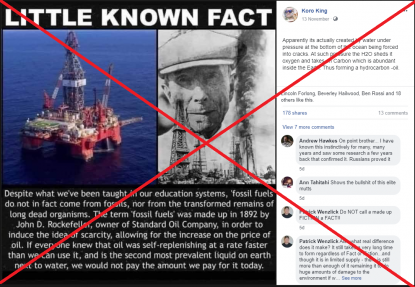 The post shows an image of an oil rig and a photo of John D. Rockefeller.

The text superimposed on the image claims fossil fuels “do not in fact come from fossils, nor from the transformed remains of long dead organisms”.

The text adds: “The term 'fossil fuels' was made up in 1892 by John D. Rockefeller, owner of Standard Oil Company, in order to induce the idea of scarcity, allowing for the increase on the price of oil. If everyone knew that oil was self-replenishing at a rate faster than we can use it, and is the second most prevalent liquid on earth next to water, we would not pay the amount we pay for it today."

Similar claims were also shared hundreds of other times by other Facebook users, including here, here and here.

The claims, however, are false, according to experts.

Fossil fuels refer to “any of a class of hydrocarbon-containing materials of biological origin occurring within Earth’s crust that can be used as a source of energy”, according to the Brtiannica Encyclopedia.

Fossil fuels are not derived from the fossilized remains or impressions of prehistoric plants or animals.

But contrary to the claim in the Facebook post, fossil fuels do “come from dead plants and animals buried in sediment,” according to Rupert Sutherland, a geophysics professor at Victoria University of Wellington.

“Under most circumstances the dead plants and animals are ‘recycled’ back into the atmosphere, ocean, or biosphere and do not become fossil fuels; but in special cases they are preserved and become ‘kerogen’,” Sutherland told AFP in an email on November 11.

“If buried to sufficient depths this ‘kerogen’ becomes converted to petroleum and can migrate through the pore spaces," he added. "Certain key times in our geological history account for most of the known petroleum reserves, so they are fossils in the sense that they are derived from plants and animals that are many millions of years old".

The American oil magnate John D. Rockefeller is not credited with coining the term “fossil fuels”.

A University of Queensland Centre for Natural Gas spokesperson told AFP in an email the term was first used by German chemist Caspar Neumann in the English translation of his 1759 book The Chemical Works of Caspar Neumann. The term is noted in the book’s index here.

The term “was subsequently used widely in the early 1900s”, the University of Queensland spokesperson added.

Google NGram results for "fossil fuels" also show the word being used periodically between 1700 and 1900. Its usage spiked after 1940.

A screenshot of the Google NGram viewer results, taken November 20, 2020.

Dongke Zhang, a chemical engineering professor at the University of Western Australia, told AFP in an email on November 10 that oil and natural gas aren’t replenishing “over one’s lifetime”.

Professor Sutherland also said it is unlikely fossil fuels are replenishing faster than they can be used because scientists "do not see evidence in cores of relatively young sediment with large enough amounts of carbon being preserved”.