A Kenyan presidential candidate who has styled his campaign on the legalisation and commercialisation of marijuana claims it offers the country a way to clear its public debt of 8.2 trillion Kenyan shillings (approximately $69 billion). In television interviews, Roots Party leader George Wajackoyah has made broad and unsubstantiated claims about marijuana, ranging from its legal status in the United States to revenues generated by other countries which sell the crop. AFP Fact Check examines some of his statements.

Wajackoyah is among four presidential candidates cleared by the Kenyan electoral body to take part on August 9, 2022.

A lawyer, he stands out for his attire as much as his advocacy of marijuana, which he promises to smoke openly if elected president. 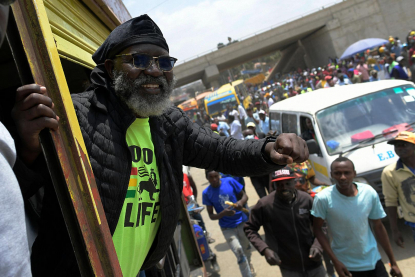 Marijuana is illegal in Kenya, but Wajackoyah has promised to change all that with a policy of legalisation, arguing the crop has the potential to unlock billions of dollars for the country.

“... We have the solution and that solution is growing marijuana which will enable this country to clear off all the outstanding debts," he said during an interview on Citizen TV.

However, some of his claims are highly exaggerated.

Wajackoyah claimed in two different television interviews that the US federal government has decriminalised marijuana.

On June 8, 2022, in an interview on Citizen TV, Wajackoyah said: "The United States two weeks ago decriminalised marijuana from being a federal offence. We have 22 states that are now officially growing marijuana.”

“In the US, the federal government has decriminalised marijuana to be no longer a federal offence,” he said.

This is not true.

While many states in the US have made significant strides in regulating marijuana, at the federal level the possession and distribution of the substance remain an offence punishable by a jail sentence.

According to US law, marijuana is still classified as a Schedule I substance, a category of drugs that “have no currently accepted medical use in the country, cannot be safely prescribed, and a high potential for abuse”.

Currently, 19 states, two US territories and the District of Columbia have approved marijuana for recreational purposes – presumably the 22 states Wajackoyah was referring to.

A total of 41 states and territories have regulated the drug for medical use, according to the National Conference of State Legislatures (NCSL).

In the two interviews, Wajackoyah claimed that in 2021 Canada made hundreds of billions of dollars in profits from trading marijuana.

“If you look at Canada, last year alone they earned $486 billion from marijuana,” Wajackoyah said, insisting that legalising and commercialising the plant would help Kenya clear all its debt.

But these purported earnings are false.

According to Deloitte's 2021 cannabis annual report, the crop contributed $43.5 billion to Canada’s GDP since 2018, when it was legalised. Total sales in the same period were estimated to be $11 billion, with the government receiving $15.1 billion in various taxes and levies.

But while these numbers pale compared to Wajackoyah’s claims, Deloitte’s assessment of the industry was reasonably glowing.

“We found that the Canadian cannabis sector has made a significant economic contribution… in the three short years since legalisation,” the report stated, adding that 98,000 sustainable jobs were created.

Canadian economist and commodities expert Steve Burke told AFP Fact Check the process of legalisation, commercialisation and eventual realisation of profits from cannabis is more complex than what Wajackoyah has made out in his campaign.

“Government investment into a cannabis industry would not scratch the surface of Kenya's debt over the next 10 years and would likely add further debt stress,” Burke said.

Deloitte estimates the capital expenditure of the cannabis business in Canada between 2018 and 2021 at $29 billion. This is about 42 per cent of Kenya’s public debt.

Burke added that regulation alone was expensive enough to be a barrier.

“Cannabis demand still makes up a tiny proportion of domestic economies, usually less than 0.1%, and consequently makes up an even smaller proportion of tax revenue ... No one country has a large enough cannabis market to make domestic production viable enough on a large scale to provide meaningful relief to government finances,” said Burke.

The Canadian government committed about $46 million to public education and awareness after legalizing marijuana in 2018.

Aly-Khan Satchu, CEO and founder of a Kenyan investment advisory firm, was similarly cool on the prospects of marijuana.

“Kenya's debt is in the region of $70 billion. There is no plausible path where marijuana earnings could extinguish the debt,” Satchu said.

Burke, who is the lead economist at CRM AgriCommodities, a UK-based firm dealing with grain and oil seeds market, added that while the market for medical and recreational marijuana is growing, it is not uniform across all segments of the industry and for success, there needs to be specialization and years of investments.

“To break even it would take years of investment and research and development into the industry to capture international market share, which is growing more competitive by the day with major developed economies leading the way," he said.