A video has been viewed more than a million times on YouTube and Facebook alongside a claim that it shows Indonesian President Joko Widodo recently declaring war on Malaysia. The claim is false; the footage actually shows the president giving a speech in an anti-drug event in 2016, in which he declared war on drugs. In the misleading video, his speech has been edited, removing parts referring to drugs and drug traffickers.

"Finally! Jokowi officially declares war on Malaysia," reads the Indonesian-language title of this YouTube video, which has been viewed more than one million times since it was posted on July 21, 2022.

The eight-minute video includes footage of the Indonesian president, popularly known as Jokowi, giving a speech.

"This extraordinary crime has permeated many layers of society. It all needs to stop. It must be resisted and we cannot allow it anymore. We reiterate it's war. Chase them, catch them, strike then, hit them. If the law allows it, shoot them!" he partly said.

"With our collective strength and intelligence, we chase, catch and strike [them]. No matter where, I order all government resources to be present and eradicate it. I want to reiterate it is time we go on war." 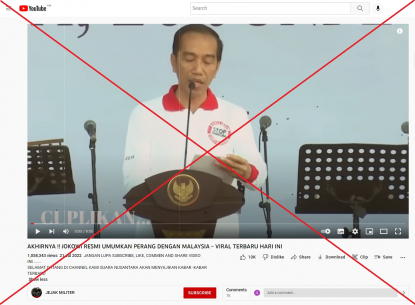 The rest of the footage contains a female voice-over suggesting Indonesia should declare war on Malaysia, as well as various clips of Indonesian soldiers.

Despite sharing close cultural and linguistic ties, Indonesia and Malaysia are frequently embroiled in diplomatic spats.

Most recently, in June 2022, former Malaysian prime minister Mahathir Mohamad sparked controversy after he suggested the Indonesian province of Riau Islands -- along with Singapore -- should be returned to Malaysia as "Malay lands".

Indonesia's foreign ministry said his claim had "no legal basis". Mahathir later said his comments were taken out of context.

The video has been shared alongside a similar claim on YouTube here, here and here, as well as on Facebook here.

Some comments on YouTube show support for the claim, saying Indonesia "is not to compromise, national dignity is everything" and "people will not stay quiet and surely will defend the country."

Reverse image and keyword searches on Google found this video, published on the YouTube channel of Indonesian State Secretariat Ministry on June 27, 2016.

The footage is titled: "President Jokowi: Chase drug traffickers! Catch them! Or even shoot them!"

Below is a screenshot comparison between the video in the misleading post (L) and the original footage published by the Indonesian secretariat ministry (R):

The video shared in the misleading post has been edited, including removing words that refer to drugs and drug traffickers.

Here's what Jokowi partly said in the genuine footage -- AFP has marked parts of his speech that appeared in the misleading video in bold:

"And even more worrying, this extraordinary crime has permeated many layers of society. As stated by the National Narcotics Agency chief, there are kindergarteners who have been exposed to drugs, primary school pupils who have been exposed to drugs. Not only in cities, rural areas, villages. Not only adults, teenagers, children, and as I said even drugs have entered kindergartens. This is not only ordinary people but also even government apparatus, officials, and those who are supposed to become role models take drugs ...

"It all needs to stop. It must be resisted and we cannot allow it anymore. We reiterate it's war on drugs in Indonesia.  I want to remind all of us in ministries, in government agencies, in our law enforcement institutions. Especially in the police, reiterate to all regional police chiefs and their ranks, to all precinct police chiefs and their ranks: chase them, catch them, strike them, hit them. If the law allows it, shoot them! ..."

He also said: "With our collective strength and intelligence, we chase, catch and strike the drug traffickers, whether they are big, medium or small ... No matter where the drugs are in Indonesia, I order all government resources to be present and eradicate it, in prisons, schools, borders, airports, sea ports, government offices, no matter where.

Jokowi ended his speech saying: "Once again, I want to reiterate it is time we go on war against drugs."

The full transcript of his speech can be found here on the website of the Ministry of State Secretariat.

According to a description of the transcript, President Jokowi gave the speech during a commemoration of the International Day Against Drugs Abuse and Illicit Trafficking, which falls on June 26.

Jokowi's speech, in which he made a strong statement against drug dealers, was covered in multiple news reports on June 26, 2016, such as here, here and here.

Other footage and audio

It also includes various clips of Indonesian soldiers, including a January 2021 troops briefing before the deployment to the border with Papua New Guinea and a military academy graduation ceremony in March 2022.

Apart from Jokowi's speech, the video also features a female narrator reading various past news reports about Indonesia-Malaysia tensions, such as here, here, here and here.

As of August 1, 2022, there is no official report that Indonesia has declared war on Malaysia.