This clip shows a climate protest in Italy, not Ukrainian protesters in Spain

A video clip of motorists angrily dragging away demonstrators who were blocking a highway has been viewed tens of thousands of times in online posts that claim it shows Ukrainian anti-war protesters obstructing traffic in Spain. This is false: the clip was filmed in a highway in the Italian capital Rome. The group that staged the protest told AFP it showed a climate demonstration unrelated to Russia's invasion of Ukraine.

Its simplified-Chinese caption translates as: "In Spain, radicals from Ukraine sat on the road and blocked traffic with banners. Spanish drivers apparently didn't like it and angrily yanked the activists off the road. A woman tried to move to the front of the car after being dragged away."

The 28-second video shows irritated drivers confronting protesters seated in the middle of a highway -- pulling them away and ripping banners out of their hands. 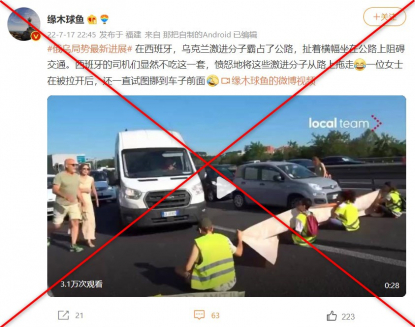 The video was also shared in Chinese and Czech posts alongside a similar claim that it shows Ukrainian protesters in Italy.

A reverse image search of video keyframes on Google found a longer version of the clip streamed live on YouTube by Italian news organisation The Local on June 16.

The clip in the misleading posts corresponds to The Local's video, starting from the five-minute and 48-second mark.

According to its website, Extinction Rebellion is an international movement that uses non-violent direct action and civil disobedience to persuade governments to act on climate change.

Below is a screenshot comparison of the clip in one of the false posts (left) and the video from The Local (right): A screenshot comparison of the video in the misleading post (left) and The Local's video.

A representative for Extinction Rebellion told AFP the protest was organised by Ultima Generazione, a group that split off from the movement a few months prior.

Responding to the posts, a press representative for Ultima Generazione told AFP: "No activists on that roadblock are Ukrainian or have Ukrainian relatives."

"It was a roadblock about ecoclimatic collapse, not about war in Ukraine," the representative added.

Ultima Generazione published an article about the protest on its website.

It includes a video of the protest and the same people can be seen sitting on the road. The group's video also shows several other instances of the activists getting dragged away by other motorists.

The location shown in the clip corresponds with Google street imagery of a stretch of the Grande Raccordo Anulare in Rome.

Below is a screenshot comparison of the video (left) and its corresponding location on Google Maps (right) with similar features highlighted:

A screenshot comparison of the live-stream video (left) and the Google map imagery (right), with matching features circled by AFP.