A video clip of Kenya's Deputy President William Ruto purportedly admitting to a career built on the proceeds of corruption during an interview with the BBC is circulating on social media. The clip, however, has been edited to make it sound like Ruto had admitted to financial wrongdoing. In the original interview, Ruto in fact said he grew his career from “nothing”.

On July 22, this Twitter account shared an edited video of an interview Ruto conducted with the BBC alongside a caption that claimed he said: "I have grown my career from corruption.” 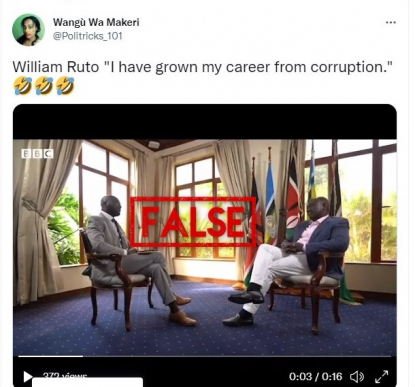 In the clip, Ruto appears to utter the words, although there is a noticeable distortion when the word “corruption” is heard.

The same clip was shared on Facebook here and here.

The video, however, has been manipulated to add the word "corruption".

Using a keyword search, AFP Fact Check found the original version of the interview on the BBC website.

During the interview, Ruto – who is bidding to become president when the country votes on August 9, 2022 – says he is the best candidate to succeed Uhuru Kenyatta, noting that it would end a long history of the nation’s leaders being picked from a small circle of elite families.

Ruto is running against three other presidential candidates, but his main contender is former prime minister Raila Odinga, who has the backing of Kenyatta.

At about 85 seconds into the BBC video, the 55-year-old, who describes himself as a “hustler”, says: “To put it much more clearly, I have grown my career from nothing. And I have climbed the ranks and learned the hard way to where I am today.”

Odinga and Ruto have accused each other of corruption (see here and here). Both have made it a key part of their campaigns, arguing that by rooting out vice, the country will save billions of dollars.