Voters in Nigeria’s Osun state went to the polls on July 16, 2022, to elect a new governor for four years. The election was won by Ademola Adeleke from the opposition People’s Democratic Party (PDP). But on the eve of the election, a video surfaced on social media with a claim that it showed a member of the ruling All Progressives Congress (APC) distributing what appears to be cash, purportedly in exchange for votes. This is misleading: the video is not recent; it was first published online back in 2018, when the politician in question belonged to a different party before he joined the APC.

“APC at work in Osun state. 2k each (sic),” reads a Twitter post published on July 15, 2022, and accompanied by a video showing Iyiola Omisore, who is currently the national secretary of the ruling APC, allegedly handing out cash. 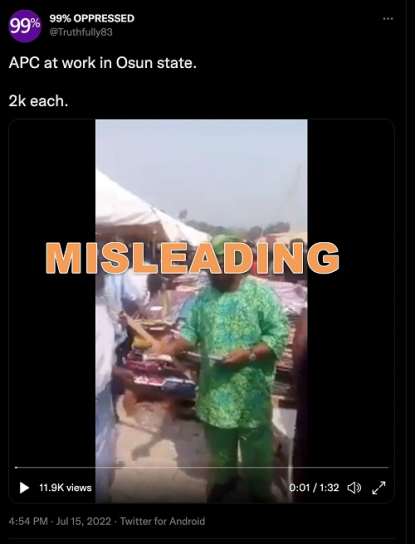 He ran for governor as a member of the PDP in 2014 but lost to APC’s Rauf Aregbesola. He tried again in 2018 as the candidate of the Social Democratic Party and lost once more, before defecting this time to the APC in 2021.

However, the claim that the video captures him as a member of the APC is misleading.

It was uploaded on January 9, 2018, by Sahara TV, a video production arm of Sahara Reporters owned by Nigerian journalist and opposition politician Omoyele Sowore.

The caption indicates the video was recorded in the run-up to the 2018 Osun gubernatorial election. Sahara Reporters published the video on Facebook the same day.

The footage was also shared on Twitter on September 21, 2018, a day before the election in which Omisore came third as the candidate for the Social Democratic Party, behind APC’s Isiaka Oyetola and Adeleke.

It later resurfaced in 2020, in a tweet referring to alleged “votes buying”.

Omisore defected to APC in February 2021. He was elected the national secretary of the party in March 2022.

There is no evidence Omisore was investigated after the footage first surfaced in 2018. He has condemned politicians for offering money to people in exchange for their votes, and denied seeing instances of vote-buying in the 2022 election.