A video has been viewed hundreds of thousands of times after it circulated in social media posts that claim it shows people being handcuffed while undergoing mass Covid-19 tests in China. The video was shared as China continues to impose mass testing and citywide lockdowns in a bid to quash new outbreaks. The claim, however, is false. The video was taken in April 2022, during a police raid on a pornography ring in Lanzhou, northwestern China.

The 28-second video, which shows people standing in line, with their hands apparently handcuffed behind their backs while armed police guard them, was posted on Twitter here on July 15, 2022.

"Somewhere in China, a large number of people have their hands handcuffed by the police, and are escorted by heavily armed police and special police to do nucleic acid testing," reads the Chinese-language tweet. 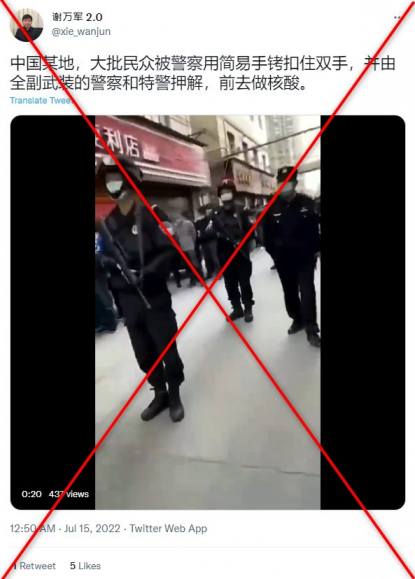 China continues to impose harsh lockdowns, mass testing and forced quarantine across the country to quash new outbreaks as it sticks to its hardline zero-Covid policy, as reported by AFP here and here.

The video has been viewed more than 706,000 times after it circulated on Twitter alongside a similar claim in Chinese here and here, and in English and German.

A combination of reverse image and keyword searches on Chinese search engine Baidu found similar photos were published in a report by Lanzhou Daily, a newspaper based in the capital of Gansu province, in northwestern China, on April 29, 2022.

The article partly reads: "The Chengguan Public Security Bureau recently took down a pornography lair and successfully arrested all relevant persons involved in the crime."

The Lanzhou Daily further reported that the raid was conducted on April 25, 2022.

Chengguan is one of the five districts in Lanzhou.

Below is a screenshot comparison of the video in the misleading post (left) and a photo in the news report (right), with similarities marked out by AFP:

The storefronts of a noodle restaurant, on the left, and a hair salon, on the right, are visible in the misleading video at the 13-second mark.

The shops can be seen in the photos geotagged to the location on Baidu Maps.

Below is a screenshot comparison of the video in the misleading post (left) and the photos on Baidu Maps (right): 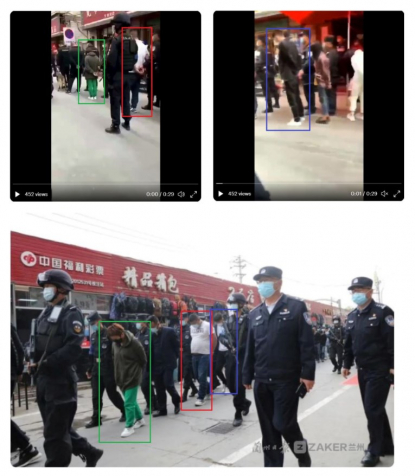