A video of water cascading down a flight of stairs has been viewed thousands of times in tweets and Facebook posts that claim it shows a flooded bus station in Peshawar, in northwestern Pakistan. This is false. The video has circulated in news reports about Hurricane Ida hitting New York City in September 2021. The footage shows signage and machines that are used in the New York subway system.

"A glimpse of the award-winning Peshawar BRT station in the rain!", reads the Urdu-language caption of a video published here on Facebook on July 22, 2022.

The 15-second video, which appears to show water rushing into an underground station, has been viewed more than 2,000 times.

Peshawar BRT, also known as TransPeshawar, is a public transport system in Peshawar, the capital of the northwestern province of Khyber Pakhtunkhwa.

According to Pakistani newspaper Dawn, it won a Best Smart Ticketing Programme award for 2022 at Transport Ticketing Global. In February, it received a Gold Standard Service award.

The same video was shared alongside a similar claim on Facebook here, here, and here; and on Twitter here, here and here.

A reverse image search on Google found the same video has been circulating in social media posts and news reports about flooding in New York City caused by Hurricane Ida in September 2021.

A tweet containing the video was embedded in a report by the French state-owned channel France 24 here on September 2, 2021.

Another tweet containing the video was embedded in a report about Hurricane Ida published here by the tabloid newspaper the New York Post on the same day.

Below is a screenshot comparison of the video in the misleading post (left) and the video as it appeared in a tweet in 2021 (right):

A further keyword search on Google led to this tweet by New York-based broadcaster NTD News that contains the video.

The tweet reads: "Waterfall down the stairs at 145th Street station, 1 Train, in #Manhattan, #NYC. Flash #flood warnings are in effect until 11:30 pm."

A closer analysis of the video indicates it was filmed in New York City -- not Peshawar.

A search on Google Maps shows there is a subway exit at this location for the 145th Street station.

The two machines next to the staircase also match the colour scheme employed by ticket machines used in the New York City subway, as seen here on the website of the Metropolitan Transportation Authority (MTA). 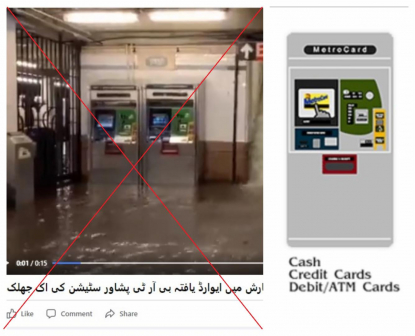 There have been no official reports about major flooding at Peshawar BRT stations, as of July 28.