Video of firefighters is unrelated to Dutch farmers' protest


Social media posts claim a video shows firefighters who joined farmers protesting environmental regulations in the Netherlands. This is false; the footage was taken in Poland at a charity event to raise money for a sick child.

"Firefighters have now joined the farmers in Holland. This is how it is done!" says a July 10, 2022 tweet. 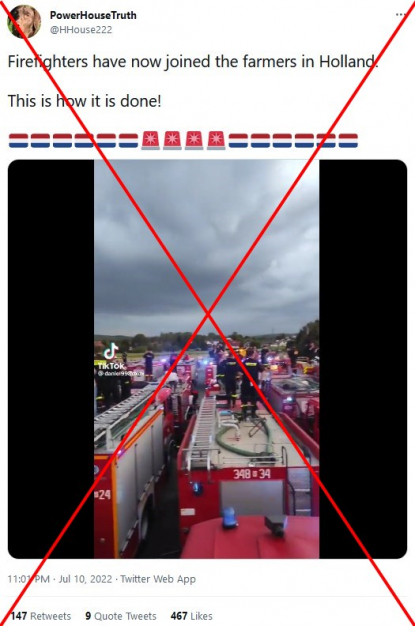 The video circulated online as thousands demonstrated against the Dutch government's plan to slash farmers' nitrogen emissions by 40 percent, which would require around 30 percent fewer cattle, according to reports.

The government intends to cut nitrogen, a greenhouse gas, by as much as 70 percent to reach climate goals by 2030.

But the footage in the posts was not taken in the Netherlands -- and it does not show firefighters supporting the Dutch farmers' protest.

The clip shared on Twitter shows the handle of a TikTok profile, where the original video was published. 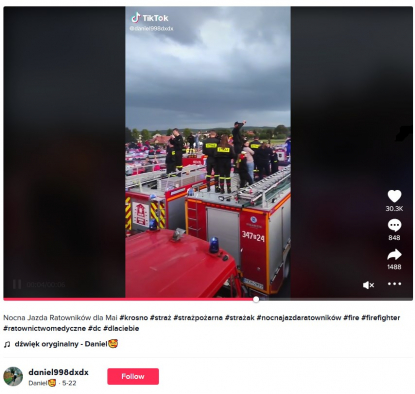 The caption -- translated into English from Polish -- says: "Night Rescue Ride for Mai."

By searching for the terms in Polish, AFP found a May 2022 charity event on Facebook that was organized to raise money for a young girl named Mai.

A Polish news article says the 5-year-old, who also goes by Maja, was born prematurely and suffers from cerebral palsy due to perinatal hypoxia. The funds raised will go toward paying for long-term treatment to help her move independently in the future, according to the article.

A local broadcaster captured footage from the event and published it on YouTube.

AFP has fact-checked other old visuals shared out of context during farmers' protests in the Netherlands.