Skip to main content
A segment of the Large Hadron Collider is seen at the the European Organisation for Nuclear Research (CERN) on February 6, 2020 ( AFP / VALENTIN FLAURAUD)

Social media posts claim a particle collider at a European nuclear research laboratory can create black holes with the potential to swallow Earth or create cataclysmic effects. This is false; scientists and an independent safety assessment have concluded that any microscopic black holes created would only last for a fraction of a second, and that they could help promote a better understanding of the physical world.

"CERN is opening the demonic portal to hell today at 4 pm EST," says text accompanying a Facebook Live video posted July 5, 2022. "This could create a black hole on earth. It could potentially suck in everything surrounding it."

A separate Facebook video from July 4 claimed a particle accelerator from the European Organization for Nuclear Research (CERN) "can create a black hole that'll destroy the earth inside out." Some posts said the event fulfilled a biblical prophecy of the end of the world. 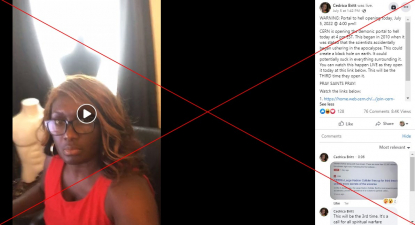 CERN's Large Hadron Collider (LHC), which uses a 17-mile loop of superconducting magnets to smash sub-atomic particles at close to the speed of light, has been the subject of numerous conspiracy theories -- amplified in part by the Dan Brown novel "Angels & Demons," which includes a plot to steal antimatter from the lab.

CERN on July 5 restarted the LHC on the France-Switzerland border, resuming its high-energy particle collisions after three years of maintenance and upgrades. The goal: build on research of the Higgs boson, or "God particle," at the intersection of energy and matter.

Contrary to the posts online, scientists and a CERN safety report say any black holes created in the process would be microscopic and harmless.

CERN's website notes that these differ from cosmic black holes or deep gravity sinks in space.

"Although theory predicts that microscopic black holes decay rapidly, even hypothetical stable black holes can be shown to be harmless by studying the consequences of their production by cosmic rays," the lab says.

"The fact that the Earth and Sun are still here rules out the possibility that cosmic rays or the LHC could produce dangerous charged microscopic black holes." 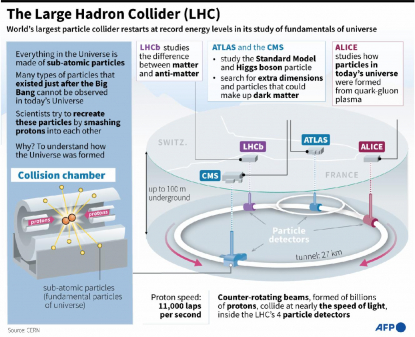 David Miller, an associate physics professor at the University of Chicago who has collaborated on CERN research, said the particle collisions at CERN are no different from what is happening in the atmosphere.

CERN's research has sparked speculation on social media that these experiments are opening up a "portal" to a new dimension or parallel universe.  But Miller said the discussion of "dimension" refers to potentially new ways to understand the physical world, including the force of gravity.

"Maybe we can create some microscopic concentration of energy ... which would exist for a fraction of a second and spray out a bunch of particles," he said. "If this happens it would be amazing because we would have discovered new physical behavior in the natural world."

Other posts discuss the risks of creating antimatter that has the potential to create a massive explosion. But Miller said antimatter is already used in medical settings, including imaging to detect tumors -- and that the quantities created at the lab are far too small to pose a threat.

At the current rate of production, Miller said "it would take 109 million years to create 1.4 grams of antimatter protons at CERN," which would be similar to a nuclear explosion.

Elliot Lipeles, an associate physics professor at the University of Pennsylvania, said scientists have examined claims of lacking safety and found no basis for them.

"These claims have been thoroughly studied and there is no risk," Lipeles said in an email, pointing to the lab's 2003 safety analysis -- which has been reaffirmed in subsequent research.

Other social media posts blamed the particle accelerator for a wide variety of phenomena, including earthquakes and the destruction of a monument in the state of Georgia, without offering evidence to support the claims.