Skip to main content
Abortion rights activists rally outside of the US Supreme Court in Washington, DC, on June 29, 2022 ( AFP / Mandel Ngan)

A list of herbs that are said to induce miscarriages is circulating on social media following the US Supreme Court decision to end the right to abortion nationwide. Some of the substances promoted online have been linked to pregnancy loss, but abortion providers say they can be ineffective and medical experts warn they could be dangerous to consume.

"Just as a heads up, if you are in early stages of pregnancy definitely DO NOT ingest the following as they can potentially induce a miscarriage especially in their tea forms," says text in a June 24, 2022 post on Facebook.

While the post and others call for people not to ingest those substances, the captions and timing suggested they are aimed at promoting alternative abortion treatments.

"There's actually a lot more and other animal species even do this on purpose," the June 24 Facebook post's caption says. 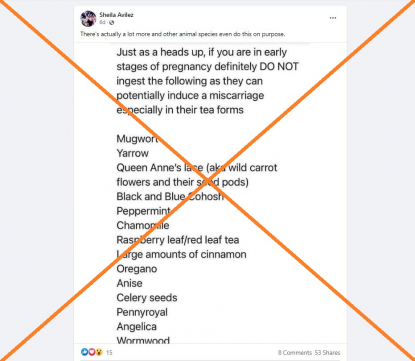 Similar posts have accumulated thousands of interactions on Instagram and Twitter, according to CrowdTangle, a social media insights tool. Rolling Stone reported that videos touting herbal abortion remedies have also racked up hundreds of thousands of views on TikTok.

The posts come in the wake of the US Supreme Court's decision to overturn Roe v. Wade, the landmark 1973 ruling that made abortion a right nationwide. Several states immediately banned the procedure following the ruling.

While some of the substances circulating on social media have been linked to miscarriage when consumed in high doses, none of them have proven to be safe and effective abortion treatments. Abortion providers, herbalists and medical experts have all debunked the posts.

"There are no safe, effective methods of inducing abortion with botanicals," said Jen Gunter, an obstetrician-gynecologist and writer, in a June 29, 2022 Substack newsletter. "If there were, I'd be the first to tell you."

Gunter continued: "Many herbal abortifacients are quite literally poisons, so abortion may be a by-product of the poisoning."

The National Library of Medicine (NLM), a division of the National Institutes of Health (NIH), says on its website that pennyroyal is "likely unsafe" when taken by mouth or applied to the skin -- including while pregnant. Among the possible side effects are kidney and liver disease.

"Despite serious safety concerns, pennyroyal is used for the common cold, pneumonia, fatigue, ending a pregnancy (abortion), and as an insect repellant, but there is no good scientific evidence to support these uses," according to the NLM.

In a June 28, 2022 Twitter thread, Josh Trebach, an Iowa-based medical toxicologist, warned against using pennyroyal to induce an abortion.

PLEASE DO NOT TAKE PENNYROYAL AS AN HERBAL ABORTION

this is incredibly dangerous--it can cause liver failure, seizures, and DEATH pic.twitter.com/tStSkEzOoJ

"Please do not take pennyroyal as an herbal abortion," he said. "This is incredibly dangerous -- it can cause liver failure, seizures, and death."

Other substances promoted in the posts, such as blue cohosh and mugwort, also have toxic effects. Some, such as chamomile and peppermint, are safe in small doses -- but herbalists and abortion providers say there is little evidence they are effective at inducing abortion.

"I have never in my 35 years of work recommended an herbal abortion. One -- because they're not reliable," said Aviva Romm, author of "Botanical Medicine for Women's Health" and former president of the American Herbalists Guild. "Could they possibly work? Possibly yes. But more often they don't work effectively, and the risk is, to get to high enough doses that you would need to even theoretically be effective, you're pushing to quite toxic doses."

Romm said scientists have "no data on the actual effectiveness of these herbs" and that there is "actually very little research on any of them." Instead, she said those seeking an abortion should consider medication or surgery.

Megan N. Freeland, director of health communications at Planned Parenthood Federation of America -- the leading abortion provider in the US -- agreed. The "most effective, well-studied regimen for medication abortion in the US is mifepristone and misoprostol," she said.

"To be clear, the spectrum of approaches people have used to try to induce an abortion ranges from the less effective or ineffective (herbal treatments) to the unsafe (chemicals or incorrect medications) to the dangerous (physical harm)," she said in an email. "Research shows that self-managing an abortion with abortion pills (mifepristone and/or misoprostol) can be safe and effective."

The US Food and Drug Administration (FDA) has approved the use of mifepristone, which is taken with another drug called misoprostol, for abortions up to 70 days into a pregnancy. Demand for the medication -- which the Guttmacher Institute, a pro-abortion rights research group, has estimated accounts for half of US abortions -- surged following the Supreme Court's reversal of Roe v. Wade.

"Instead of promoting unsafe methods that have no proof of efficacy, advocates should be focusing on finding ways for people to access mifepristone and misoprostol, or even misoprostol alone," Gunter said in her newsletter. "In fact, misoprostol by itself is far safer than any botanical and also more effective." 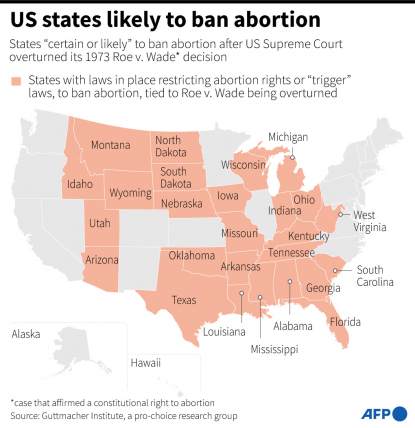 The 26 US states seen as "certain or likely" to ban abortion after the Supreme Court overturned its 1973 Roe v. Wade decision, according to the Guttmacher Institute, a pro-choice research group ( AFP / Jonathan WALTER, Kun TIAN)

According to data from the World Health Organization (WHO), up to 20 percent of abortions globally take place in dangerous circumstances.

"Unsafe abortion is a leading -- but preventable -- cause of maternal deaths and morbidities," the public health agency says on its website. "It can lead to physical and mental health complications and social and financial burdens for women, communities and health systems."

Kaitlyn Brown, clinical managing director for the American Association of Poison Control Centers (AAPCC), told AFP in an emailed statement that the national nonprofit had "not experienced an increase in case volume related to herbal abortifacients."

But she cautioned that "herbs or herbal teas are not held to the same regulatory standards as FDA approved drugs" and noted that herbal products "may contain harmful impurities that are not stated on the ingredient label."

She said anyone experiencing side effects can receive condfidential help by calling the national Poison Help line (1-800-222-1222) and additional information is available by visiting poisonhelp.org.

AFP reached out to the American College of Obstetricians and Gynecologists and the US Department of Health and Human Services for additional comment.